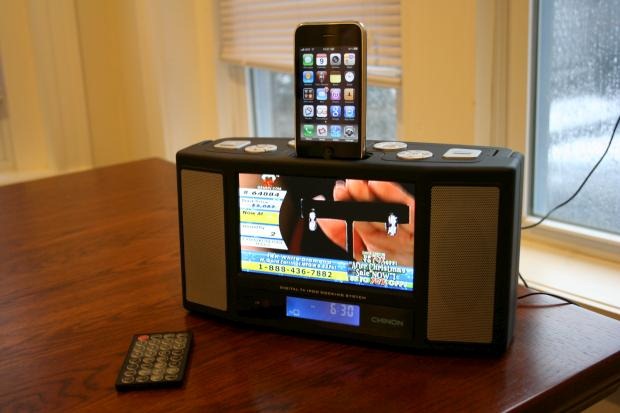 Short Version: There’s a whole lot of convergence going on with the $200 Chinon AVi. You’ve got an iPod dock, 7-inch digital TV that doubles as an iPod video screen, music player, FM radio, and alarm clock all contained within something the size of a toaster. As with all heavily converged devices there’s the risk of being a jack-of-all trades, but master of none. Does Chinon’s product break that mold or does it suffer the same fate as most others?

Let’s get this out of the way; if you’re looking for the best 7-inch TV, paired with the best iPod dock, paired with excellent speakers and a great remote, this isn’t it. That combination would cost well over $200, though. So what you get with the Chinon AVi is a decent TV with a decent iPod dock, plus decent speakers and a terrible remote. Any product with one of these credit card remotes will get dinged in any review I do. I can’t stand them.

I envision this thing in dorm rooms, toll booths, RVs, and at pre-game tailgates across the country. That’s where it’ll be most comfortable. Dorm rooms, especially. You’ve got a TV, iPod dock, and alarm clock occupying very little physical space. 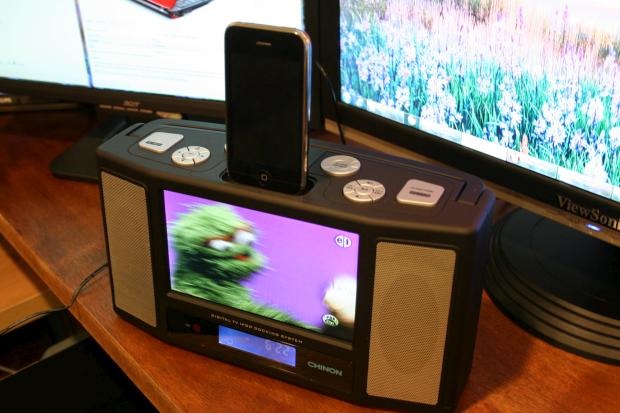 The TV function works well provided you get a strong array of digital signals to your house. I’m normally able to get a decent amount of channels on the other TVs in my house, although the antenna that ships with the AVi only pulls down about half of them. To make matters worse, when I went to go try out a better antenna I found that the coax connecter has been sunken into the back of the AVi, like so: 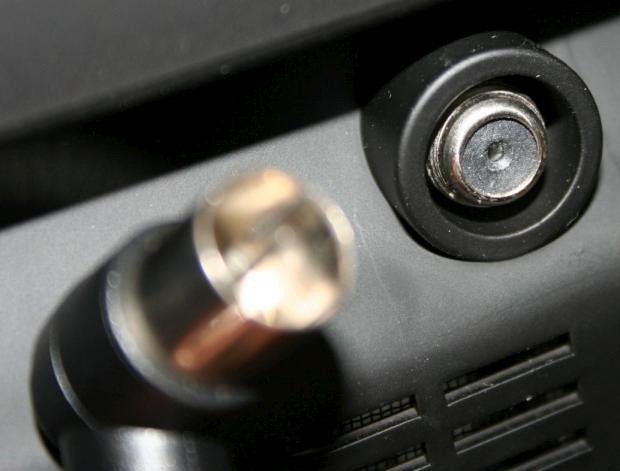 That means you’re stuck with the quick-connect antenna that ships with the dock unless you have a higher-quality quick-connect antenna at your disposal. So as for the TV function, it has potential provided you’re getting a good signal. The video quality of the LCD screen is absolutely watchable – good, even.

As for the iPod functions, you’ve got compatibility with the following models: 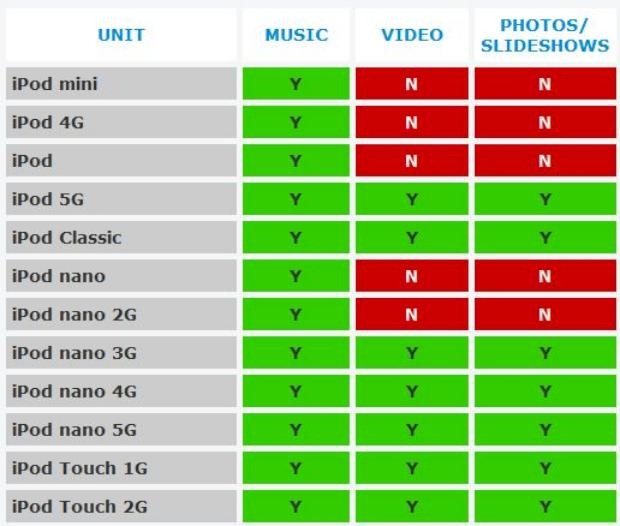 Note that only video and photos are output to the dock’s screen. If you’re listening to music, the screen is blank – no album art or anything like that.

I was able to use my iPhone 3GS just fine with the Chinon AVi. I got a little popup warning every time I docked it but the thing actually worked and charged just fine. When you play a video, it pauses on your iPod and then plays out on the LCD screen. Video quality is pretty good, although that’ll depend on how the video you’re watching was encoded too. 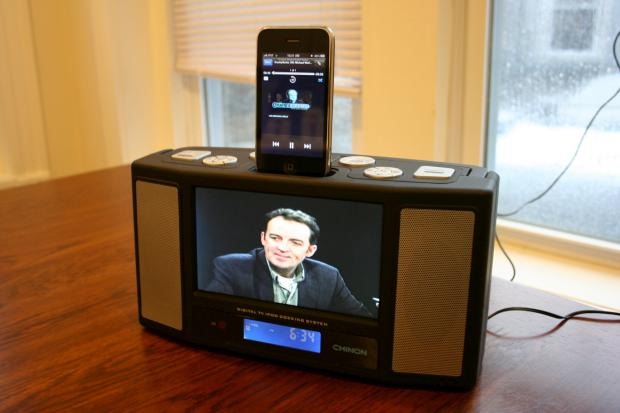 As far as the speakers are concerned, they’re pretty basic. Turning the volume up full blast doesn’t get all that loud and it results in distortion, so you’ll be keeping things at around 80% if you’re really looking to rock out. Music played at regular volume sounds relatively flat, too, so if you’re an audiophile you’ll want to look elsewhere.

The alarm clock is easy to set and you can choose to wake up to your iPod, the TV, the radio, or a standard buzzer. The buttons atop the Chinon AVi are nice and big, so hitting the snooze button isn’t a problem at all.

The credit card remote is the scourge of the consumer electronics industry. A few years ago one of my friends decided that now that he was out of college, he shouldn’t have to ever drink warm beer. “I graduated and I’m making decent money, so there’s no reason I should ever have to drink a beer that hasn’t been sufficiently cooled ever again,” he said.

That’s not totally Chinon’s fault. It’s the industry saying, “One time a long time ago, a handful of people thought these tiny remotes were kind of cool. Let’s make a zillion of them and include one with every product that needs a remote control unless the manufacturer says otherwise.” For $200, Chinon should have said otherwise. That’s all I’m saying.

Okay, so bottom line: Nice size, nice list of features and functions, so-so execution on all fronts. That leaves us with the price. I think that for $99, this thing would fly off shelves in CVS, Walgreens, and Rite-Aid locations everywhere. At $200, though, I’m left expecting a bit more – album art, decent antenna, way better remote, and better speakers for starters.