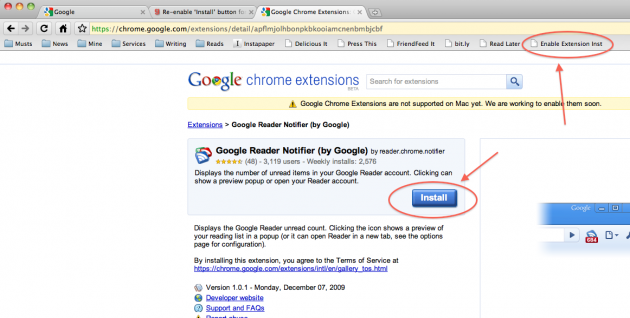 Ah the Internet, I knew you would come up with a solution. No sooner do I write a post about how Google has disabled Chrome Extensions for Mac even though they will work in the latest builds of Chromium (the open-source browser which Chrome is based on), does someone come up with a solution. Matt Mastracci, the founder of DotSpots and a blogger at Grack.com, has created a simple bookmark that turns on the “Install” button for any Chrome extension.

Previously, the extension install button was grayed-out if you were on a Mac, but dragging this bookmarklet to your toolbar in Chromium and clicking it when you’re on an extension landing page will turn the gray box bright blue. From there, you can click to install any extension, and you’re all set. I’ve just installed a handful of them; all seem to be working just fine despite Google’s reluctance to enable the feature for Mac.

You should note that since Google isn’t officially supporting extensions in Chrome for Mac yet, you should use this at your own risk. But I’ve been using them for a while in various Chromium builds, and haven’t noticed any major issues. Google promises that official extension support will be coming to the dev versions of Chrome for Mac soon.

Update: And as Googler Aaron Boodman notes in our comments on the previous post, “FWIW, we will be re-enabling Chromium support in the gallery soon. That was done not on purpose.”