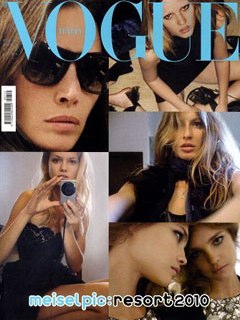 Who says Twitter isn’t mainstream? Vogue Italia has just dedicated an issue to the microblogging network. The magazine’s December cover features a montage of TwitPics of some of the world’s most famous models, including Gisele Bundchen, Christy Turlington, and Natalia Vodianova.

In the collage, models are taking pictures of themselves via popular Twitter photo sharing app TwitPic. And the layout of the editorial feature is also an ode to Twitter.

This isn’t the first time Vogue Italia has shown a little technology love. In 2007, the fashion-forward magazine devoted a cover to the rise of YouTube and webcams. While the Twitter-focused issue may take some by surprise, it’s not irrelevant to the fashion community. As Twitter becomes more of a platform for designers and consumers to converse about fashion, the platform becomes a key mechanism for both news and new styles.