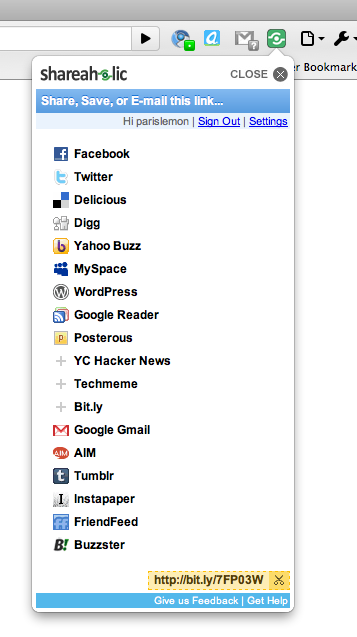 Google has begun its big push to bring extension support to its Chrome web browser. Currently, it’s accepting extensions from developers that it will be placing in some sort of gallery to launch at a later date. Last week, we showed the nice, new Aviary extension for Chrome. Today, we get very popular Firefox extension that is now Chrome-ready, Shareaholic.

As we noted in September when Shareaholic closed its seed funding, the extension has surpassed over 1 million downloads for Firefox. And for good reason: It makes sharing on just about every service on the web as simple as two-clicks. The new Chrome version works pretty much exactly the same as the Firefox version; you click the button and you are presented with a drop down list of social options for sharing. A shortened URL is automatically made for the webpage you are sending.

If you have a Shareaholic account you can set options for the extension including picking and choosing which social networks to include in the drop-down. You can also pick which URL shortener to use (Bit.ly is the default one). But you don’t have to have a Shareaholic account to use the extension, it will simply use the default sharing options (such as Twitter, Facebook, Delicious, etc) to populate your drop-down.

The extension is fast, and thankfully, does not seem to slow down Chrome at all. Obviously, extension support is a big key to Chrome competing with Firefox, the browser known for its extensions. And this simple extension support also gives Chrome a huge leg up over the top dog of the browsers, Microsoft’s Internet Explorer.

Shareaholic’s extension, which is technically still is beta, is accessible through this direct link. Once you download it, simply drag it into your Chrome (version 4.0 or greater, which is still testing) browser window to install it. One note: It’s not working correctly with the latest dev build of Chrome for Mac, but it is working in the latest Chromium builds for Mac. Chrome for Mac’s beta launch is imminent, but Google has stated that extension support will not be in that build right away.

Shareaholic noted that the team at Google helped them port the extension over to Chrome. Clearly, they want to have the best extensions available early.