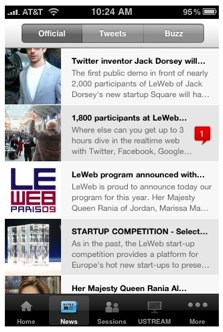 As mobile web usage increases, conference attendees need real-time, updated information on the go that can be accessible from mobile devices. Mobile Roadie, a startup that helps develops iPhone apps, has developed the official iPhone app for LeWeb, the foremost European technology conference organized by French entrepreneur and Seesmic founder, Loic Le Meur and his wife, Geraldine. LeWeb 2009 is set to take place next week in Paris, France. The LeWeb App, which is free, essentially puts the entire conference in the pockets of show attendees and lets anyone who isn’t attending the conference watch a live stream of the events directly from their iPhones.

The LeWeb App packs in the essentials for attendees, speakers, and participants, including a detailed show schedule and agenda, speaker bios, and directions. To help people network at the show, the app contains a list of show attendees with a link to their Twitter profiles. The application also supports Facebook Connect and Twitter integration, so that all comments and Tweets can be blasted back out to Facebook and Twitter with the hashtag for LeWeb. And the app features push notifications so administrators can send alerts and updates easily to iPhone users.

Mobile Roadie has partnered with Ustream to enable iPhone users to watch LeWeb live inside its own app. For now, Mobile Roadie only offers iPhone apps but will soon offer the ability to develop apps for the Andoid in January. The beauty of Mobile Roadie’s platform is that it offers a dead simple mostly-automated system to build apps and have them posted to Apple’s App Store in as little as a week. Launched earlier this year, the startup develops mobile apps for other conferences, events, and venues, as well as musicians, athletes, politicians, and other celebrities.