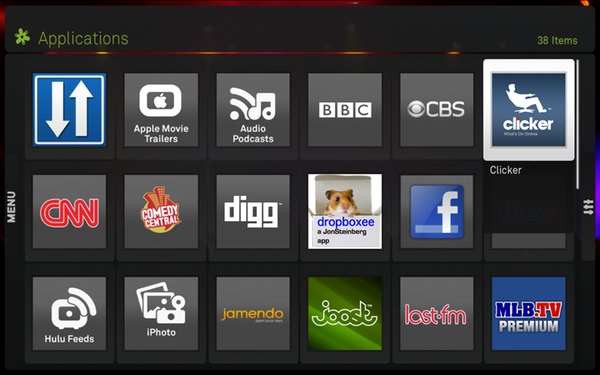 I don’t watch a lot of television programming, and I’m not particularly patient with the way “Big Media” treats me, the consumer. I really wanted to like Flash Forward, but it’s pretty clear that the show is more interested in hitting that 100 episodes mark to earn syndication than it is in delivering an interesting, gripping story. So I gave up on that, and on a lark decided to try Fringe, to kill some time. Unfortunately, Hulu doesn’t have the beginning of the series, let alone the beginning of the current season. I’m not excited about jumping into the show midstream. I’m also not interested in navigating the various network websites to find their hosted copies of the shows I might watch. Isn’t that what Hulu was supposed to do for me?

Enter Clicker.com. “Clicker aims to become the complete programming guide to Internet television.” Indeed, they have an impressive catalog of more than 400,000 television episodes from 7,000 different shows, not to mention movies and original web content. They’ve been around for awhile, but today they’re unveiling their new Boxee app, allowing you to access their impressive catalog of content from within Boxee.

Clicker’s Boxee app gives you the opportunity to experience our service in a brand new way — on your actual television. You can search for your favorite shows, movies and videos, or you can browse through hundreds of categories. All this while sitting 10 feet away with a (real) clicker in your hand.

Now we’re getting somewhere! I have Boxee installed on the Mac Mini attached to my television, though I don’t often use it. I’ve found it easier (for me) to simply use the Finder to navigate folders of media, and to play said media in VLC. That’s great for the movies I’ve ripped, but not so great for television programming I might like to watch. A unified interface to watch my movies and television would be great.

I eagerly installed the Boxee Clicker.com app, and tried it out. It’s a great idea, and shows a lot of promise, but there’s still a long way to go. To be fair, I recognize that this is a first release of the Clicker app, so there’s no way they’re going to have a fully functional release on their first try. Although I set up an account at Clicker.com, there’s currently no way for me to access that account from within the Boxee app. I’m told that’s coming very soon. Perhaps most aggravating, to me, is that the listing of available content within the Clicker.com app shows a lot of stuff to which I don’t actually have access. I foolishly clicked Ghostbusters from the “Popular Movies” column, which is sourced from Netflix. Nothing happened. Even if something did happen, I wouldn’t have been able to watch it anyway, since I don’t have a Netflix subscription. Oh Clicker, you tease me so.

I’ve spoken with the crew at Clicker and shared some of my frustration with this user experience. There are a number of challenging constraints with what they’re trying to do. From the Clicker website itself, clicking on a Netflix-sourced movie will take me to Netflix where I can sign in. From the Clicker app, selecting a Netflix-sourced movie should transfer the connection over to the Netflix app, assuming you’ve authenticated it. I uncovered a bug: when you don’t have the Boxee Netflix app activated, nothing happens. The Clicker team told me that they’d get to work on fixing this in a future version.

I can watch Ghostbusters for free at Crackle.com, and I can see that at the Clicker.com website. But the Clicker Boxee app doesn’t contain everything that their website indexes. From the Clicker app announcement:

Not all the programming you can discover on Clicker.com is available on Boxee yet, so our Boxee app explicitly features only shows or movies that are currently available through Boxee. That includes over 180,000 episodes from over 3,000 TV and Web shows, as well as 5,000 movies. We’re working with Boxee to add more content and many more sources in the future.

It’s true. There’s a lot of content displayed inside the Clicker.com app. Navigating all that content can be a little time consuming. Searching that content, right now, feels like a waste of time. Here’s a screenshot of me trying to search for Fringe: 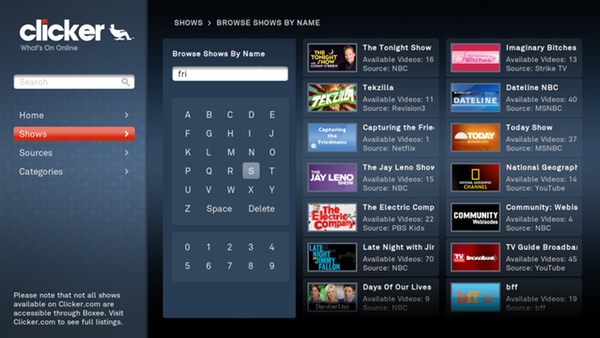 Okay, so Fringe isn’t available through Clicker on Boxee — I can dig that. But the search results provided make no sense to me. I have no idea how a search for “fri” would produce that set of results.

Speaking with the Clicker crew, and using the Clicker website a bit more, clarified the situation: I was expecting a straight match of my search term against the raw show titles. Clicker, however, is being a lot more helpful. They don’t have Fringe to show me, but they are showing me other media that is related to Fringe in a number of ways. Maybe an actor from Fringe was a guest on Jay Leno’s show; or some behind-the-scenes piece about Fringe appears on another program. That’s what the search results are in the screenshot above. This is made much more obvious when you search the Clicker website: the results clearly indicate the connection to the search term. Again, it looks like I uncovered a bug, and the team is going to brainstorm ways to improve the search result listing to disambiguate why that set of results was returned.

There’s a lot of other little things that show that the Clicker.com app, while a great start, still has quite a ways to go. After speaking with the team, I’m actually quite enthusiastic about the future of the Clicker app on Boxee. The Clicker team says they’re listening to user feedback, and my experiences so far support that, so start tweeting and, uh, Facebooking your suggestions to make the Clicker app better.