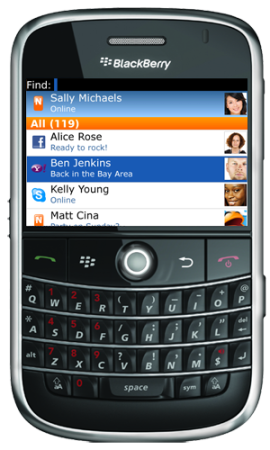 Mobile communication startup Nimbuzz has just made the first native application for BlackBerry smartphones that allows for multi-network chat sessions available in Research In Motion’s App World store (get it here).

The native functionality allows the free app to run in the background without interruption, have alert notifications ‘pushed’ to the BlackBerry device’s home screen and match notifications with the phone’s sound profiles.

The program is first-generation, and Nimbuzz promises more features are forthcoming. For instance, the app can today only be used for instant messaging conversations on BlackBerry smartphones, because the relevant API only very recently gained support for VoIP applications (the startup said to expect integration of Internet calling features in the app shortly).

Nimbuzz, backed by $25 million in venture capital, notably also recently won the ‘Connect On Blackberry’ award at RIM’s BlackBerry Alliance Program’s EMEA Innovation Awards in Rome. To date, over 38 million BlackBerry devices have been sold, and Nimbuzz has been installed on about 12 million of them.

The new native app should work on all BlackBerry smartphones running OS v4.6 or higher, including the Storm, Bold, Tour, Pearl Flip and BlackBerry Curve 8900 smartphones.