We’ve been tracking the progress of Meebo‘s Community IM bar for a long time now: it was announced back in July 2008, started rolling out in October 2008, and is now exposed to nearly 100 million people worldwide on dozens of partner sites. Clearly it’s making good progress, but since launch the options available to publishers for customizing the bar have been quite limited — you basically had to use Meebo’s default layout and buttons, and couldn’t include any custom links. Today Meebo is a launching a new Programming API that changes this, allowing publishers to make significant changes to the community bar.

Up until now, the Meebo bar has always consisted of a Chat area in the far right (similar to Facebook Chat), a share button in the far left, and occasionally an ad on the left as well. Now, publishers will be able to introduce their own menus and buttons. For example, I could include a button that listed the top five most popular posts on TechCrunch. Publishers have full control over what they show in their menus or widgets, so there’s plenty of room for creativity.

To help publishers get started, Meebo has built 10 premade buttons that they can quickly integrate. These include buttons to share to StumbleUpon or Digg, view your Facebook stream, and listen to music from Lala. There’s even one that takes the reader to a random article on your site.

The new feature will likely appeal to many of Meebo’s partners, but it will be especially helpful to sites with a lot of content who frequently get vistiors through search engine traffic. Oftentimes when you land on a site through a search result, you’ll be looking at an article that is relatively old. Typically if the publisher wants to highlight some of their newer content they have to do it in the nav bar or a side bar on the page, which are easy to scroll past and miss. Using the Meebo bar, publishers can present you with a list of their top recent posts that’s always visible, regardless of where you navigate on the site. 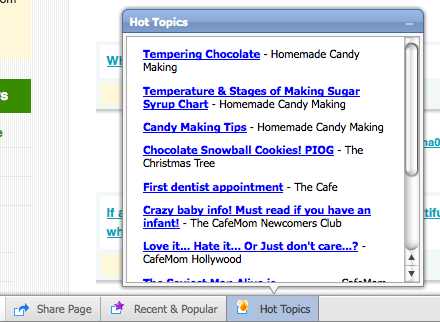 One thing that could turn some publishers off is the fact that Meebo is mandating that you keep the integrated chat feature on the right side of the bar. Meebo is built around instant messaging so this isn’t surprising, but I suspect that there are plenty of publishers who would like to include these custom navigation elements but don’t neccesarily want the chat. But it sounds like Meebo isn’t totally opposed to the idea: the company says it will be “thinking a lot about” what it do with this functionality over the next year.

If you’d like to see a customized Meebo bar in action check out CafeMom, which rolled it out this afternoon. More partners will be launching their own custom bars in the near future.