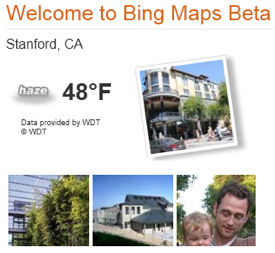 Earlier this morning Microsoft outlined some of the major new changes coming to Bing, including the introduction of the new Bing Maps (you can see our full coverage here). A few minutes ago, the Bing Maps Beta went live for everyone, bringing with it a number of innovative new features sure to keep the Google Maps team on their toes. You can try out the new beta here. But there’s one catch: in order to tap into the site’s new features, you’re going to have to have Microsoft’s Silverlight installed.

There are a number of new things to check out here. First, there’s Streetside, Bing’s answer to Google Street View. The controls are nearly identical to Street View, allowing you to virtually stroll down the road and pan around to look at the buildings you’re passing. But Bing is doing some innovative things here. In Google Maps, when you leave one area and walk down the street to another, the images blur together for a moment in a sort of “light speed” effect. Bing is taking a different approach: it’s actually building 3D models based on its images, so you can smoothly walk down the street, at least in theory. In my experience this is still slow and pretty glitchy (I’ve seen some odd polygon loading issues), but you can see that it’s going to be very cool once it’s more polished. 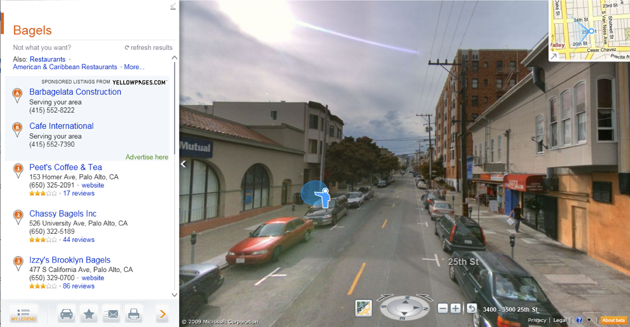 Unfortunately, you’ll find that Streetside isn’t nearly as comprehensive as Google Maps — I just tried to take use it in Palo Alto (where TechCrunch HQ is located) and the option wasn’t available. Here’s a map showing how much of the Bay Area is covered by Streetside: 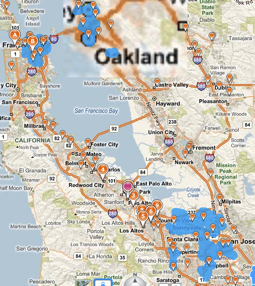 Bing Maps is also taking advantage of Microsoft’s very cool Photosynth technology, which we’ve covered extensively over the last few years. The technology can take multiple photos and stitch them together to create a 3D environment that you can “walk through” by clicking on each new photo. It’s a little bit like Street View, but these Synths are usually built around a landmark (like the Statue of Liberty) or even a museum.  And let you see the subject from many different angles. Synths are represented on Bing Maps as green pins — click one, and you’ll get thrown into the synth.

As you browse a map, you also have the option of checking out “What’s Nearby”, which plots hotels, restaurants, and other points of interest on the map. Again, Bing is doing some nifty things here. You’ll notice that if multiple POIs appear in the same place, Bing will intelligently combine them into a single icon with a (+) on it. Clicking that will then cause a full list of those locations to appear, each of which is easy to click on.

You can further customize your Maps experience by hitting the small arrow in the bottom left of the site’s UI. This will launch the “Map Apps” directory, which lets you overlay even more content on top of your map. For example, in the shot below I’ve enabled both the Twitter map and “Today’s Front Pages”. Geo-tagged tweets show up as blue pins, while clicking on a purple pin will show the front page of the local paper (you can see the San Jose Mercury news in the left sidebar). This obviously has a lot of potential, and Microsoft says it’s very open to allowing other third parties to integrating their own Map Apps. 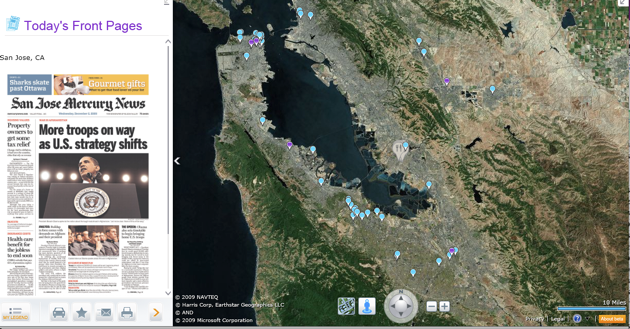 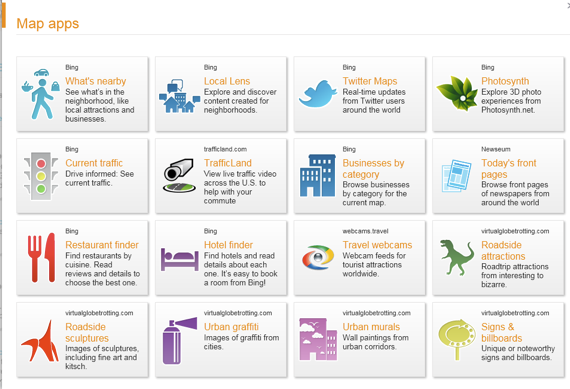