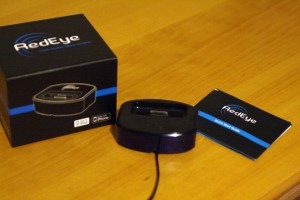 It’s as though He came down and said to MobileCrunch: “Ask and you shall receive.” We asked for this device just under a month ago and whoopee — ThinkFlood has delivered. Specifically, we wanted a universal remote because why the hell should we be using regular remotes anymore? ThinkFlood’s RedEye remote system fits the bill, works well, and is loaded with features, but it comes with a price tag of $188.

The average universal remote is $150 so the price isn’t too bad, but at the same time, it does utilize the iPhone’s touchscreen and hardware to power the remote (read: shouldn’t it be cheaper?). The RedEye remote may be a solid option for those who are already looking for a universal remote and don’t already have one. At the same time, at a lower price point, I could see this going from a nice-to-have for iPhone owners to a must-have, given the quality of the device.

I’m still putting the RedEye through a variety of well-thought-out (not) and rigorous (not) tests, so we’ll hold off for a full review. For now, hit the jump for more pictures and impressions.

RedEye was previously in private beta for testing purposes only, but is available for purchase as of today at their website.

The RedEye device itself has great design, and I was impressed with the quality of the hardware. It probably shouldn’t be stuck in the middle of a living room wrestling match, but it could probably handle an accidental ass-squishing or two. Unless of course your 300 lb. Aunt Edna decides to take a seat on it.

First impressions: I’m happy to say the device works – which is, well, fairly important. It connects to your iPhone via Wi-Fi and doesn’t seem to have any significant latency from pressing the button on your iPhone to firing a signal off to your TV/DVR/Blu-Ray player. That said, I’ve only tried it on Dish Network’s awful set-top box thus far, which already has a ridiculous lag time. Setup was a bit difficult, but that’s to be expected given that it’s a universal remote. The RedEye definitely has great potential, and as long as it delivers on some core universal remote features, it may just be worth the hefty price tag. Check out the pics and promo video below.