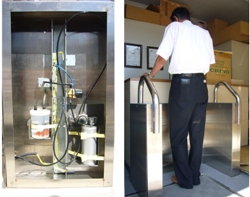 Does anyone remember the Japanese anti-burglar mat for stores and restaurants I blogged a few months ago? Well, there’s another security system from Japan and it clearly raises the bar: It’s a new mechanism, dubbed Capture, for these places and it sprays stinky agent on thieves who won’t be able to get rid of the stench for a week.

The idea is to able for the police to easily identify the bad guys even after they manage to escape from the crime scene. All that store owners need to do is to push a button, and Capture will spray stinky agent from special gas carts onto the thief or burglar. The carts can be placed behind the counter, in the store’s ceiling or at the entrance, for example.

It takes three to five minutes for the agent to begin stinking and trying to wash it away won’t work as it will linger on for a week. And there’s even a reason for this five-minute time lag: It’s supposed to avoid making the bad guys so angry that they physically assault store clerks or restaurant staff who would then suffer from the stench themselves.

The system is the result of joint development by three Japanese chemical companies who plan to offer it for about $1,150, mainly to convenience store operators. (Apologies for the small picture. It’s the only one available at this point.)