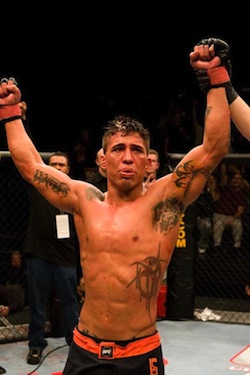 War Machine (real name Jon Koppenhaver) starred in a season of The Ultimate Fighter in 2007, then went on to have a pretty successful professional career of 10 wins and three losses in 13 fights. After being kicked out of the UFC for making controversial comments (and refusing a proposed fight), he bounced around various independent mixed martial arts promotions.

All of that ended a few weeks ago when he signed on with a pornographic film talent agency. He shot a few scenes (I’m sure you can find them if you look around), and everything seemed to be going well for War Machine. But, being War Machine (read: sorta crazy), you knew it wasn’t going to last.

All well and good—and hilarious—but not necessarily relevant to us here.

Until War Machine decided to tweet about his night.

Can I just say how amazing the phrase “WM was back in effect” is? Yes, I think I can.

It’s interesting to note that the most salacious tweet, the one taunting the police to find him, has since been deleted.

I love wasting money on bail…lol

Let this be a lesson to y’all: if you freak out at a party, and knock people out left and right, and fully expect to be questioned by the police over your involvement, don’t tweet something like, “I dare you to find me, copper!”