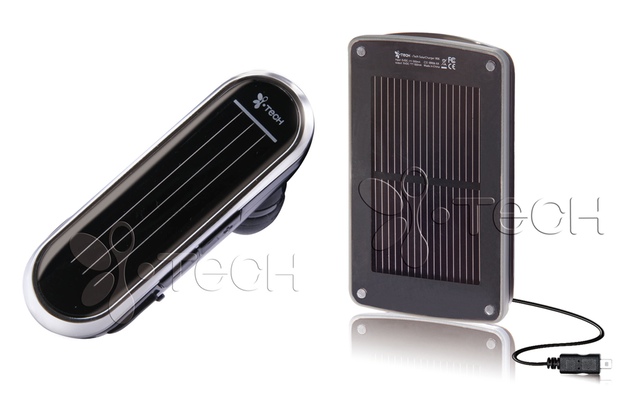 My first experience with solar energy was in Cub Scouts, when we made a solar-powered hot dog cooker. Unfortunately, solar technology hasn’t advanced terribly much in the intervening decades. At the consumer level, solar power still isn’t particularly useful for very much outside of a few niche markets. i.Tech has a couple of products that make a real effort to bring usefulness to solar power for the average user: the SolarVoice 908 Bluetooth headset and the SolarCharger 906 multi-device charger. 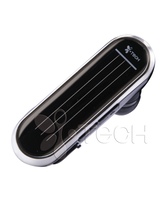 Speaking solely for myself, I’m not particularly keen on Bluetooth headsets. They have a certain utility, but I’m not often in situations where that utility is really necessary. If I were, though, I think the SolarVoice 908 would be my headset of choice. The earbud really is extremely comfortable to wear, and just as the marketing material suggests, I never experienced the “plugged ear” feeling that I get with other headsets.

In most respects, the SolarVoice 908 is a pretty run-of-the-mill headset: sound quality is okay, but not superb; it’s lightweight and comfortable; and the buttons are too small to use without looking at the darned thing. The fact that it can be charged by sunlight, though, is a pretty big draw. It comes with a little cradle that you can mount to your dashboard, or office window, so that you can easily let it soak up the rays when it’s not in your ear. Solar charging is extremely slow, so you’re not likely to rely solely on solar power to keep this thing going. The notion of “infinite standby” is neat, but requires “optimum sunlight”, which isn’t likely to happen for most folks, most of the time. It’s a nice fall-back, though, and may help you out if you’re the kind of person who forgets to plug in their devices regularly.

The features that sway my opinion of the SolarVocie 908, though, are the A2DP support and multi-point connectivity. If you’re going to have a Bluetooth headset stuck in your ear, it might as well be doing something. A2DP support lets you stream media from your fancy smartphone, allowing you to enjoy (regrettably mono) music. It’s handy for audiobooks, too! And multi-point connectivity means you can keep the SolarVoice 908 paired with two devices simultaneously. That’s probably not a big deal to most people, but it’s a nice feature to have, if you ask me.

The SolarCharger 906 gets a very big thumbs up from me. It’s small, lightweight, and extremely useful. It’s the kind of accessory I really don’t mind carrying around with me, because there’s almost no penalty to doing so. When I need it, I can pull it out of my manbag and charge my devices.

The SolarCharger 906 charges pretty quickly via USB (about four hours), and provides more than enough juice to keep my iPhone going for a couple of hours. If I’m on a long drive, or visiting friends, I can simply leave the unit on the dash of my car, or propped in a window somewhere to soak up some solar energy. Full charge by sunlight takes 22 though.

This would be a good device to take camping, to be sure. Leave it out to charge while you hike, or hunt, or do whatever it is you do when you’re in the woods, away from your computer. You could then power an iPod or other media player to keep you entertained through the long, dark night. It might also be a lifesaver, should you need to make an emergency cellular call after a couple days in the rough.

Juggling the various adapters included with the SolarCharger 906 is a nuisance, and it would have been nice if some more elegant storage mechanism was provided. Instead, you get a clear plastic box, with individually wrapped adapters. Also, keep in mind that the cable provided with the device has a micro USB connector, but does not carry any USB data signaling. It can only be used for charging devices. In order to minimize the number of cables you tote with you, set theirs aside and use a regular USB data cable: it’ll allow the SolarCharger 906 to charge your devices, and allow your devices to connect with your PC as expected.