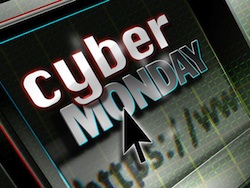 Cyber Monday is fake. It was created only a few years ago to take advantage of the fact that, on the Monday after Thanksgiving, online retailers saw a huge increase in sales. So, if there’s already an organically created spending surge, why not make it an event? Let’s throw a few marketing dollars behind it, and turn it into a second Black Friday.

(Black Friday, you’ll recall, is named thus because it was the day that retailers around the country got out of the “red” and into the “black.” Does that even happen anymore, when people have next to no money to spend on anything?)

This isn’t to say that Cyber Monday is a bad thing. There’s nothing wrong with buying a computer monitor for $40 less than it cost a month ago, or buying The Secret of Monkey Island for $2.50 from Steam. All I’m saying is that it’s complete, made-up nonsense. We benefit, yes, but at the same time we’re buying into marketing malarkey.

So, seeing as though we’re all cool with today being Cyber Monday, then I ask you to join me in celebrating Awesome Tuesday, which is the Tuesday after Cyber Monday. What do you do on Awesome Tuesday? Be awesome, obviously. Eat some pretzel rods, drink pink lemonade till you pass out, then, when you wake up, play Super Nintendo emulators till the sun rises.

And then you’re in Sucky Wednesday. That’s not a fun day.

Besides, we all know that Cyber Monday is just a complete rip-off of ECW’s CyberSlam. “Cyber(Anything)” should be putting money in Paul Heyman‘s pockets.