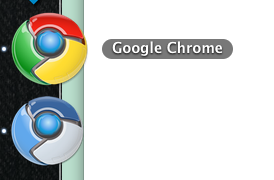 We know that a beta version of Chrome for Mac is due at least by the end of December, but today brings more confirmation that it may be even closer than that. Mike Pinkerton, the guy leading the Chrome for Mac team, has just tweeted out that there are only “8 remaining M4 Mac beta blockers! Go team! #chrome”

This means that there are only 8 things standing in the way of Chrome for Mac going beta. “M4” stands for “milestone 4,” which is how they phrase “version 4,” which the Mac beta build of Chrome will be (the current dev channel version is 4.0.249.12, for example).

It’s not entirely clear what these 8 things are as the Chrome Mac Status page hasn’t been updated in a while, and the known issues listed include things that are meant for milestone 5, not 4. But in early November, Pinkerton noted that there were 20-some M4 blockers. So it’s possible we’re just a couple weeks away, and maybe even days (again, depending on the bugs) from those getting wiped out and Chrome for Mac going beta.

In the latest Mac Chromium (the open source project Chrome is based on) builds, everything appears to be really solid. A few notable things still not working include the Bookmark Manager and full screen mode. But extensions are working, and an extension manager was recently added. The browsing experience is fast, and seems quite stable.

Earlier this month, Nick Baum, a Chrome Product Manager, wrote on a Google Group page for Chrome extensions that Chrome for Mac would have a “Beta launch in early December.” That appears to still be on track.

Update: As commenter Andrew points out below, it would appear that these are the 8 bugs. It’s worth noting that only one of them is “priority 1.” When Pinkerton sent his update in early November, the 20+ bugs he mentioned were all priority 1.