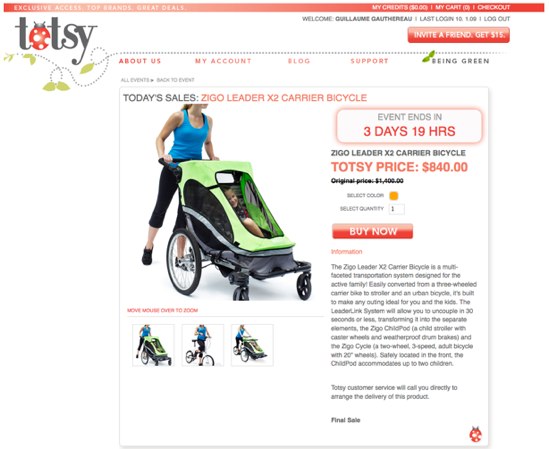 While consumers around the U.S. are sniffing out Black Friday deals today, sample sale sites have emerged to provide members with serious discounts year round. Online sample sales sites such as Gilt Groupe, HauteLook, Ideeli, RueLaLa and others, have been picking up serious traction in the past year.

We’ve seen a plethora of sites pop up for women’s and men’s clothing and accessories, travel deals and even children’s clothes. Totsy, an invitation only sales site that features children’s brands, baby gear and products, recently launched to appeal to parents looking for a bargain.

Totsy, which marks down products by 40 to 70 percent, features a variety of toys, baby products (strollers, educational toys, cribs and more), children’s clothing and bedding. Similar to other sample sale sites, shopping events are designer-specific and held over a 72 hour period. The site is also partnering with Facebook app and genealogy site FamilyBuilder to build more buzz for the sale site. FamilyBuilder’s popular Facebook app, Family Tree, has 6.3 monthly active users. The site, which has over 17 million users, also runs applications on Bebo, MySpace, Hi5 and Orkut. The partnership will allow Totsy to send invitations via Facebook and email to Familybuilder’s database of users.

Even during a recession, sample sales are managing to draw in revenue. With the tremendous opportunity in the children’s and baby good market, Totsy could take off. Gilt also offers deals on children’s goods, but Totsy is primarily focused in this sector of the market.