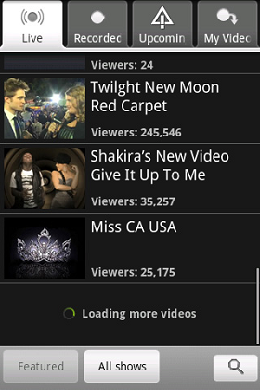 Ustream has just launched a version of its Ustream Viewer for Android Market, giving users the ability to access any Ustream footage while they’re on the go, free of charge. You’ll be able to use the app for streaming video both over Wi-Fi and 3G.

This is actually Ustream’s second application for Android. The first is its Broadcaster app, which allows you to stream video footage live from your phone to the web. The app launching today is for viewing only, but it will let you watch any Ustream feed – be it a red carpet premiere or footage of someone’s puppies – while you’re on the go.

Ustream is timing the app’s launch with a live KISS concert in Los Angeles, which you’ll be able to stream straight to your Android device (you’ll also be able to watch it on the iPhone or the web as usual).

Ustream launched the iPhone version of the viewing app last January, when it was downloaded a whopping 113,000 times in 24 hours. It’s worth pointing out that the iPhone doesn’t have a Broadcaster app, because Apple won’t approve them (Qik and a handful of others have been kept off the iPhone because of this). 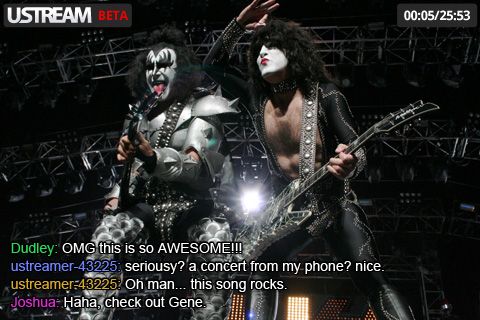