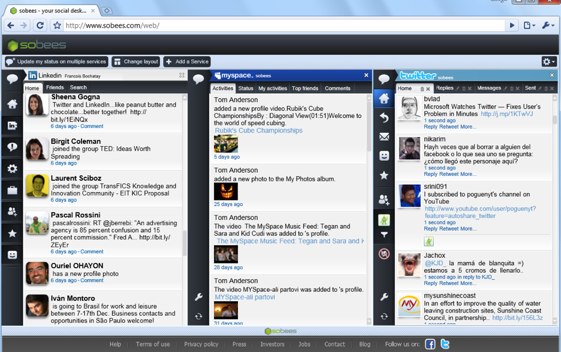 The evolution of Twitter clients have been speeding along. While Twitter is the fundamental platform that formed a base for many applications, such as TweetDeck, Seesmic, PeopleBrowsr and Sobees, these platforms soon looked to other social networks such as Facebook, MySpace and FriendFeed for additional integration. And many have conquered all mediums, with desktop, web and mobile apps. In fact, the Twitter client race has gradually become a competition to be the first to launch useful and powerful apps that are chock full of features. Sobees, which has flown relatively under the radar, is one of the first clients to launch LinkedIn integration after the professional social network just released its API.

Sobees, which has a Windows native desktop app built in .NET and a web application built off of Microsoft Silverlight, integrates Facebook, Twitter, MySpace, FriendFeed and now LinkedIn . Sobees will pull in a full feed from LinkedIn including connections updates, status updates, applications updates, jobs posted, groups joined, recommendations and profiles changes. You can also post status updates from the client, maintain connections, search your LinkedIn stream, and view profiles of connections.

In addition to LinkedIn, Sobees previously added a Facebook full feed, with the inclusion of profiles, friends, events, two-way status updates and your Inbox; and MySpace activities, including status, top friends and comments, with the possibility to update your status. And Sobees supports multiple Twitter accounts, replies, retweets, spam reporting, blocking users, replies to all, updates to status, posting pictures, shortening urls, and spell check.

Sobees desktop offers Twitter lists but the web client does not include list functionality yet. And geolocation will be added to both versions of the clients soon. You can also search Twitter and Friendfeed and enable the client in English, French, German, Italian and soon Spanish.

And in its first venture in the mobile space, Sobees is launching a native Android Twitter client which has support for multiple Twitter accounts, Twitter search and most of the basic Twitter functionality. While the app doesn’t yet have geolocation or lists, Sobees will be adding these features in the near future. Sobees says that an iPhone app is in the pipeline as well.

The Twitter client space is crowded, but it seems that Sobees could make its mark with its various clients. Its Windows client is particularly compelling and will face competition from Seesmic’s recently launched Windows app. But Sobees’ clients, both web and desktops, already feature MySpace, Facebook, LinkedIn and Twitter functionality, making it the most all-inclusive offering on the market. Seesmic and TweetDeck both have mobile offerings which are more expansive but Sobees hopes to boost its Android app soon. So why have we not heard more about Sobees? deskNet, the startup that develops Sobees, is bootstrapped and the company’s founder, Francois Bochatay, says that it simply has not been doing an PR or marketing outreach.