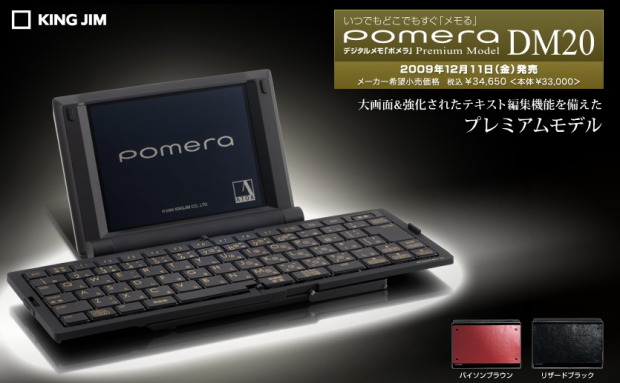 Japanese stationery maker King Jim announced the Pomera DM20 [JP] today, an ultra-compact handheld device that’s based on a “less is more” concept. The so-called digital notebook, which is unfortunately Japan-only at this point, is only made for one purpose: It lets you make notes. No email, no web access, no gaming, nothing but writing texts or quickly jotting down your shopping list.

And apparently, the general concept did attract enough users, as the DM20 is a major upgrade of the DM10 King Jim started selling last year. The new model has a 5-inch TFT VGA screen (monochrome, 640×480 resolution), a 89MB of internal memory, a microSD and SDHC slot (SD: 2GB max., SDHC: 16GB max.), a USB port and (Japanese) cell phone connectivity. Its foldable Japanese QWERTY keyboard in the 145 x 100 x 33mm body is the main selling point. 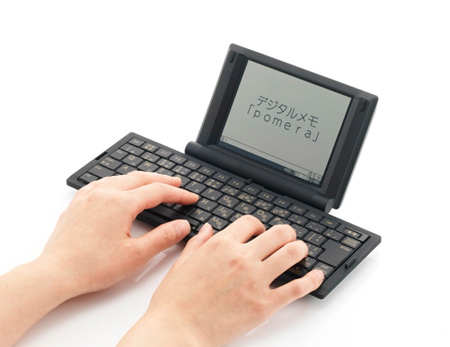 King Jim will start selling the Pomera DM20 in Japan on December 11 for $380. You could ask the usual suspects The Japan Trend Shop or Geek Stuff 4 U to get one shipped outside this country but King Jim states the device is only compatible with Japanese Windows (it won’t work with Macs at all).

Watch this video to see how the Pomera DM20 looks in action:
http://blip.tv/play/hMQ5gbHoCQI%2Em4v