Seth at PopMech went wild and started dipping a bunch of phones in liquid nitrogen. The resulting -55 degree bath cause phones to freeze, LCDs to dim, and buttons to stop. But, interestingly, it was hard to completely destroy a cellphone in liquid nitrogen.

What you see above is the Moto KRZR taking a dunk while recording video. It survived just long enough to record some bubbling and then shut off. But, most important, it came back on and the video was safe. 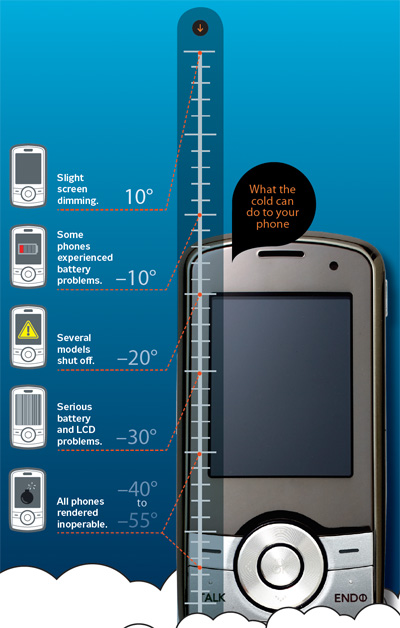 Their conclusion? It’s really hard to break phones with cold.

Amazingly, the Motorola phone survived multiple dips in the coolant. The sub-sub-sub-zero swims caused its battery to shut down, but once the phone was warmed up, it came back to life with no visible damage. We even dropped the frozen phone to the floor from hip height. And although we expected it to shatter, the fall barely caused any damage. In fact, it wasn’t until we dunked the Krzr in the liquid nitrogen four times, and then forcibly threw it to the ground, that it finally called it quits. Even then, the screen still turned on when the phone was plugged in (although it was unreadable), and, amazingly, the audio still worked. Some keys even appeared to produce a response.

The results were reassuring, if not astonishing. The bottom line: Alaska residents might endure some screen problems or short-lived batteries on cold days, but nothing a warm room couldn’t cure. And if our phone can handle repeated swims in one of the coldest liquids on earth, yours can surely survive a day on the slopes without worry.