There’s a ton of buzz around location right now. Our discussion on it at the RealTime CrunchUp this past Friday easily could have gone on twice as long as it did. There are just so many interesting facets: Business models, privacy, real-life social implications, and so on. Not surprisingly, we’re seeing an explosion of services that are built around it. One such service was a TechCrunch50 demo pit company this year, OnTheRoad.

Started in 2004 in the Czech Republic to connect travelers, newer devices like smartphones with GPS are poised to take the service to the next level. While a lot of location services such Foursquare, Gowalla, and now Loopt are built around the idea of “checking-in” to venues, OnTheRoad takes a different approach. It’s more about creating a geotagged travel diary when you specifically go on a trip somewhere.

Visitors to your OnTheRoad travel page see a map with various locations marked. On the other side of the screen there is a dynamic timeline of entries depending on what place on the map they click on. (A good example is the page the OnTheRoad team created for their TechCrunch50 trip.) This journal can contain both text and pictures. The use of this map-plus-timeline to navigate through your trip makes a lot of sense. There is also a horizontal timeline along the top of the page to go step-by-step through a trip that way.

And for the person on the trip, it’s easy to update on the go, which is obviously key. You can update your OnTheRoad journal via SMS, email, IM, or the service’s dedicated mobile apps. But what’s great is that even if you don’t have access to something like GPS to tag an entry, if you simply state where you are, the service will be able to figure it out. And if you do have access to the service’s Android or iPhone apps (the latest version of the iPhone app was rejected recently due to an API issue that they are resolving, we’re told), it’s even easier to update. 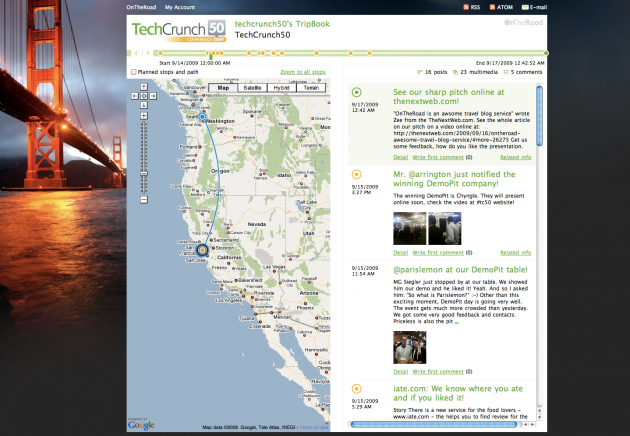 The company says Symbian and BlackBerry apps are also in the works. They also have an API they will be launching later this week. If you choose to update your page through the main website admin center, it’s a little cluttered, but overall seems to be pretty intuitive. But again, the mobile way to update seems to be key.

Though, as I said, OnTheRoad originally launched in 2004, the new direction for the service as a location-based travel journal only came about around 9 months ago. Since then, they have added about 5,000 registered users with over 50% of those coming from mobile devices. And the service is only currently localized for three areas, the Czech Republic, Germany, and the U.S. (with Japan and China in beta testing). They hope the new iPhone app, when approved, will help them make a stronger push in the U.S.

So what’s the plan to make money? Next year, the team has “5 or 6 revenue streams” they’re going to look at, U.S. marketing manager Michaela Romanova tells us. One is looking at subscription-based premium features, such as breaking news for locations. Another interesting idea involves using OnTheRoad to supply worldwide 911 numbers to travelers. In Europe, the company has already been monetizing a bit, having launched in the past year a promotion with a new Volkswagon SUV that had OnTheRoad built in to the dashboard console.

They face some competition from the likes of TripIt and Dopplr, but really this trying to be something else. It will no doubt help you organize trips a bit better like those services do, but this is more about simply sharing stories and pictures from where you are while on the go with people back home.

OnTheRoad may not be the Ker0uac novel, but it’s interesting.