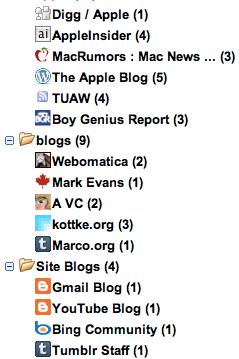 Distinguishing feeds on Google Reader can be a little hard. Since every feed has the same default blue RSS icon, it requires reading on your part to tell them apart. Reading is hard. Pictures are easier. Today, Google Reader takes a step in that direction by finally adding favicon support to feeds.

The new feature certainly livens up Google Reader quite a bit. The only problem now is that you have a lot of feeds, like I do, it’s not exactly easy on the eyes with zillions of colors bombarding your peripheral vision. But hey, no doubt some people will like this, and most importantly, it’s opt-in.

While many of its rivals have been doing favicons for a while, Google Reader was slow to add this. In fact, they only did it after soliciting feedback from their audience for what new things they should add. This feature, not surprisingly, was a popular choice, so one team member built it in their 20% time.

You can activate the favicons in the Subscriptions drop down menu in the left hand column. If you dare.