Zoho Recruit, which is an offshoot of Zoho People’s recruitment technology, is an Applicant Tracking System that helps staffing agencies and recruiting departments track job openings, resumes, candidates and contacts. The application will source candidates by gathering resumes from multiple sources on the web and includes a technology that will weed out the candidates.

The application will include a database that manages resumes and track potential candidates throughout the interviewing process. You can also schedule interviews, send automatic e-mail notifications and log candidate activities and notes.

Zoho Recruit will also power a platform to create and publish job openings. The app includes an activity stream to let users stay on tops of new within Zoho Recruit and is fully customizable. Zoho Recruit is based on a freemium model, with the more feature-rich platform priced at $12/per user/per month.

Zoho continues to innovate and iterate by launching new products and add-ons to its existing offerings. Most recently, the startup launched Zoho Discussions, a online forum tool for businesses. Over the past two years, Zohos has added support for Sharepoint, mobile, Google and Yahoo IDs and group sharing. Zoho knows that it will have to fight an uphill battle to keep users from flocking to Google Apps and soon Microsoft’s Web-based version of Microsoft 2010. Although Zoho ‘s the underdog, the startup’s strategy may be paying off—the startup has reached 2 million users in just 4 years. And the startup is on Microsoft’s radar, with a Microsoft exec calling of Zoho as a competitor that offered “fake Office capabilities.” 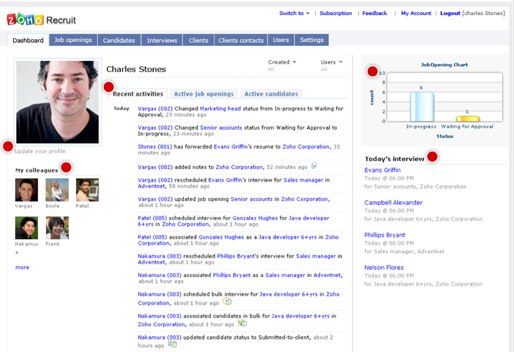