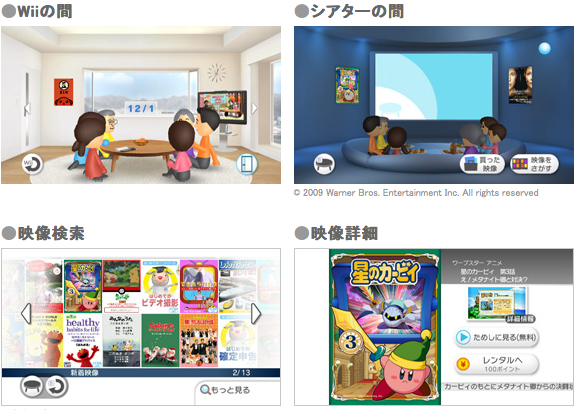 Nintendo started offering a video distribution service for Japanese Wii owners this May, attracting about 800,000 customers by late September in this country. In the same month, Nintendo promised their free channel will be made available to Non-Japanese Wii owners next year, at the same time announcing they’ll start offering paid content (in Japan) very soon. And since the weekend, we have that fee-based streaming video service [JP] over here.

A lot of the content is still free, but the new service makes it possible to view popular TV programs and some Wii -exclusive content on your console. Wii users can now watch Disney and Pokemon anime, Sesame Street, movies, soccer games and other content. Wii-exclusive content includes a bunch of educational programs.

Nintendo initially managed to gather 15 content providers, for example Warner Entertainment and Disney, that will deliver about 250 different programs by next month. By next year, Wii owners are supposed to be able to choose between a total of 1,000 titles. Prices vary heavily, with titles costing between $0.11 and $11 (10 yen and 1,000 yen).

It’s not yet clear whether Nintendo will offer those paid services outside Japan next year as well.