This morning, professional social network LinkedIn announced that it is opening up its API for developers to build applications around the platform. While LinkedIn has partnered with Twitter, Microsoft, IBM, Research In Motion and others, this will be the first time startups can tap into the platform.

While LinkedIn is releasing 11 different APIs, they fall into three distinct categories. First, developers will be able to let users easily access their information, profiles, connections and messages via oAuth login. The second functionality is to give users the ability to make actionable decisions about information, but letting them message their LinkedIn contacts, post updates, accept contacts and more. And the third piece of the puzzle is search. So developers will now be able to embed LinkedIn search in other applications.

Although the API is now available for all, LinkedIn has already partnered with a select group of developers. Here are a few examples of their integrations. 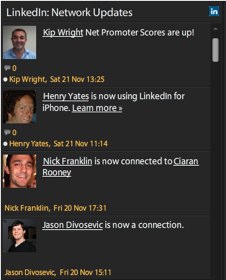 Twitter, MySpace and Facebook client TweetDeck will be integrated with LinkedIn in its next version. You will be able to add a LinkedIn column to your TweetDeck, showing all the updates from your network that would normally be visible on the LinkedIn web page. From the client, you’ll be able to see a stream of updates from your contacts, view profiles of contacts and comment and message contacts directly from TweetDeck. If you want to filter the LinkedIn column to only show certain types of update (e.g. status updates, connections or profile changes), you will be able to manage this from the new filter panel which will appear when you click the column header.

You can now add LinkedIn as an autopost site on Posterous. So when you update to Posterous, you’ll be able to update directly to your Status Message on LinkedIn. It doesn’t appear that it works the other way around.

Through Knx.to’s recently launched technology, cloud-based VoIP telephony service Ribbit Mobile will pull in the LinkedIn contact info and status updates from anyone who calls you on Ribbit. It will also pull in info from Facebook, Flickr, Twitter and other social media sites. The idea is to give a social context to all of your contacts, which is definitely useful information for both professional and personal contacts.

From the developers of TwitterJobSearch, comes JobDASH, which is an Adobe Air-powered Twitter and LinkedIn client that serves as a career management tool for IT professionals.t can be used to Track colleagues via LinkedIn, and track industry news. JobDASH also features real-time job listings that are posted on Twitter and cross posted from LinkedIn. You’ll be able to filter listings based on type of job.

While Box.net co-founder and CEO Aaron Levie is not yet sure of eventual scope of the integration, it will enable users to take content from Box.net and share it with LinkedIn contacts and on their LinkedIn profiles. Box.net is doing this via its OpenBox platform. The long-term approach is to include LinkedIn data and details on our own users’ profiles (on Box.net) to make a richer experience.