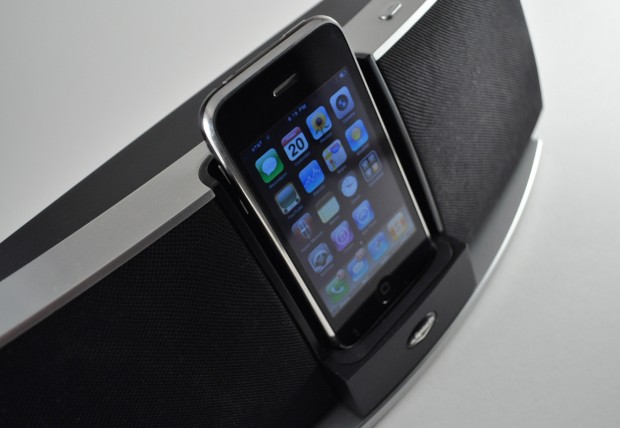 Short Version: You want to listen to Fergie in the kitchen. Don’t worry, I understand. Fergie and cooking eggs just go together well. If you’ll be piping Fergie off an iPhone or iPod, you’ll probably want a compatible speaker system.

Like anything in the audio world, the price tag on dedicated speaker systems for the iPhone or iPod can be surprisingly cheap ($30-40 bucks), or mind-blowingly expensive ($500+, like the Bose SoundDock 10). Most tend to work their way into a comfort zone of $129-$159.99 – and at an MSRP of $149.99, that’s exactly where you’ll find the Klipsch iGroove SXT. Originally released in 2007, the SXT has just been re-released with improved sound quality and compatibility with the latest iPhones and iPods. It’s not perfect, but with dual 2.5-inch subwoofers, it packs a good amount of boom for your buck.

There I was in the kitchen, still rockin’ my pajama pants from the night before. Half a dozen eggs were left in the carton, the pan was just beginning to smoke, and the Klipsch SXT was just begging for me to hit the play button. I shot the go-ahead signal across the room with the remote control right as the first egg splashed down.

Listen up ya’ll, cause this is it. The beat that I’m banging is de-lic-ious.

Yep! I was listening to Fergie. Do I like Fergie? Oh hells nah. In fact, she drives me absolutely bat shit insane – but that’s exactly why I’d picked her for this test. If a stereo could make Fergie’s sinus-backed voice sound good, I’d give it a thumbs up. And sure enough, Fergie sounded pretty damn good. The sound was filling the room better than I’d expected out of the tiny box, with a decent amount of bass pounding out of the dual 2.5″ subs.

I dug around for a few speaker systems for the sake of comparison, and, from a sound quality standpoint, the Klipsch SXT seems to fit exactly where they’ve priced it. It blows away the $80-$90 iHome clock radios we had laying around the office, and sounds quite a bit better than the almost identically priced JBL On Stage 200ID. It fell a bit short against the JBL On Stage 400 series — but considering that that 400 series costs nearly $100 more, that’s pretty much what was expected.

Dedicated iPod speakers tend to be ugly chunks of black plastic, but that’s not the case here. The SXT is essentially one big glorious speaker grill, accented with a bit of silver plastic around the edges. It manages to be color neutral without looking cheap, so it ought to fit well in just about any room you throw it in.

Snap back to the kitchen – pajama pants, eggs, etc. No one was home (and thus, no one was around to make fun of my music selection) – might as well crank it up, right? I hit the volume up button – it got louder. I hit it again – it got louder again. So far, so good. The volume level was hurts-so-good loud at this point, but there wasn’t even a hint of distortion yet. I hit the button again and… nothing. I’d capped out the volume, but had no way of knowing as there isn’t any sort of volume indicator.

There also isn’t any FM radio. Considering that most people would presumably use this in rooms where they don’t otherwise have an audio system — and that it’s almost standard amongst lower-end systems — this is a bit disappointing. Alas, FM radio almost always gets abandoned once the price tag goes up, presumably because FM radio is the last thing you want (besides AM radio) when you want to be pushing quality sound.

If you’re looking for an iPod/iPhone speaker set that smokes the sub-$100 sets and the majority of stuff available around the same $150 price tag, the Klipsch iGroove SXT ought to fit the bill. 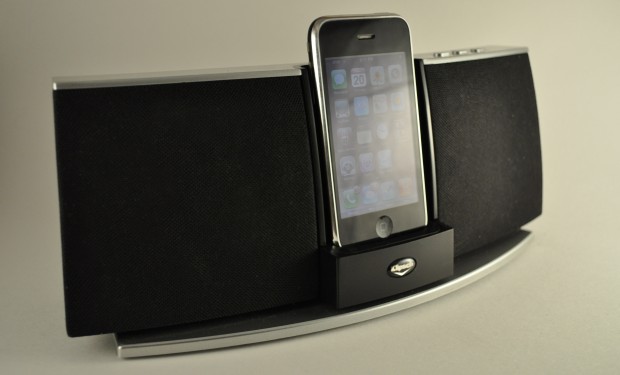