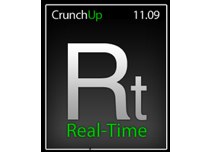 At our Real-Time CrunchUp today in San Francisco, we are hosting a panel titles “Media Streams: Are These The Utlimate Marketing Vehicle?”

ES: What are celebrities doing to leverage the social streams?

RB: I oversee Britney Spears’ digital properties and we are using Twitter to build up buzz around her concerts. Using Twitter, we were able to get 8,000 people to Times Square all by herself.

PN: Fans can feel like they are an intimate part of your lives. For example, Heidi and Spencer did a live webcast, that we did, from the Bahamas from their hotel room. They had over 50,000 people watching that.

RB: One thing that’s interesting is that we work with Facebook to sell virtual charms for Britney. We just Twittered that we were doing and it was in the press within a matter of hours.

ES: To what extent can ads and promotions appear within the Stream. Sean?

ES: But more often than not, that’s just promotion.

SR: With Ad.ly we monitor what content is appropriate for consumers. If you are tweeting things that is not valuable to your audience, your value as a content creator goes down. We limit to one ad per day to each publishers. The cool things about Ad.ly and Twitter is that when it comes to advertising, you can get creative and experiment with it.

ES: What are the types of content that works?

RB: It has to looks like it isn’t an ad, that’s its real.

PC: Twitter is unique because its a conversation which makes putting any advertising in the stream hideous.

ES: Marketers are experimenting with different ways to use this channel. Until we hear about how Twitter is going to advertise, there’s definitely a feeling that Twitter doesn’t want to pollute the stream.