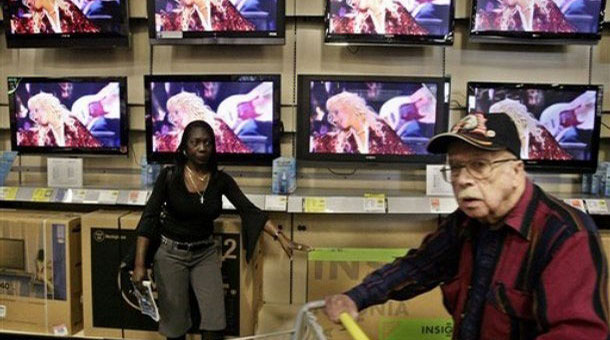 So there you are, standing in front of Best Buy’s wall o’ HDTVs. Which one do you buy? There are just so many different factors and terms: LCD, LED, plasma, 3D, DLP, 1080p. No worries. Follow these five rules and you’ll end up with the perfect HDTV for you.

Forget the LCD vs plasma debate for just a moment. It might not matter. Your room might choose your HDTV for you.

LCDs generally counter glare better than plasmas because of their matte finish. Most plasmas have a glossy screen protector over the screen, which while a great defense against flying Wii remotes and children, reflect everything like a mirror. However, if glare isn’t an issue at all and in fact, the room is a little on the dark side, buy a plasma. They thrive in darker environments where their rich colors and contrasts can really show off.

Also consider how close you sit to the TV. It’s often the rule of thumb to buy the biggest TV you can afford or that will fit in a certain area, but standard definition content like basic cable look terrible on larger HDTVs and it’s very obvious when you’re sitting close. Large TVs can also overpower a room and cause headaches and eye strain.Remember your home probably has a lot lower ceiling than retail stores like Best Buy and Walmart so the actual size of the TV might be deceiving at when you’re shopping.

Thankfully most retail stores have liberal return policies. Just be prepared to pay a restocking fee or pick-up charge if you simply return the HDTV and not buy another one.

Rule 2 – Buy the picture that looks the best to you

There is one huge advantage brick and mortar stores have over Internet retailers: demos. Walk into a Best Buy and you can see how different TVs look compared to others. This is important.

Everyone’s eyes are different. Perception is different. You can not solely rely on Internet TV reviews when buying an HDTV. You need to see it in person. Stand there. Let your eyes wonder and pick out a TV that looks good to you. Here’s what you need to look for:

Let a salesman point certain things out to you but you’re the one that’s ultimately going to have to live with the TV. Buy the one you like, but keep an open mind.

It doesn’t matter what you’ve heard, all TVs have problems. Generally speaking, a Sony HDTV will hold up just as well as a Panasonic, Samsung, or Vizio. Modern HDTVs do not have any moving parts and most use the same display panels and components anyway.

You need to accept that there’s a possibility that any number of items might go wrong with your new HDTV no matter whose logo is on the front. A good rule of thumb in the TV world is that if you haven’t heard of the brand and it’s less expensive than other options, it’s probably that store’s house brand and something you might want to avoid. If you’re really concerned about your new investment, buy an extended service plan.

Brick and mortar stores have the demo advantage, but online retailers will beat them every day in the price game. Go to Best Buy and pick out the TV you want and then shop online for it. As long as the online retailer has cheap shipping and a good return policy, you have nothing to fear. But also don’t be afraid to ask the Best Buy to match or come close to the online price. You might be surprised.

Rule 5 – The TV is only as good as the source

You’re buying an HDTV so it needs high-def content. Your standard cable will look like poo on it and yes, it will cost more each month from your content provider. Consider this extra cost when you’re shopping for the TV. It’s not a bad idea to call up your cable or satellite company before hand to find out the extra cost.

Cable subscribers generally have it the easiest, especially if they already have a digital cable box. Likely all they will need is a different box. But if you have a satellite, you may need all new equipment including a different dish. The install cost might be nominal though.

Don’t be afraid to shop around either. You might find a better deal.