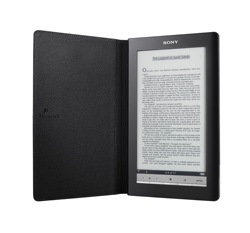 I’m in charge of writing the e-book gift guide, but it’s sorta hard to recommend items that haven’t been released yet. That IREX reader, the nook, and the Sony Daily Edition Reader are all missing in action. Thanks, guys. Today we take a minute to ask, “Where’s the Sony Daily?”

So it’s safe to say that Sony is cutting it pretty close if it wants it to be a big Christmas seller.

Things that should eventually help Sony: it’s partnered with Best Buy and Wal-Mart to sell the device there when(ever) it comes out. My elitist New York quick-take: is Wal-Mart really the place to sell a $399 e-book reader? I understand Wal-Mart is a fantastic retail partner, but I don’t really associate the Wal-Mart crowd with reading (more like affordable clothes and groceries), and with reading new-fangled e-books at that.

So, in summary, don’t be surprised if you can’t get your hands on a Sony Daily in time for Santa Claus this year. I understand waiting a few more weeks doesn’t really make a difference to you and I, but it’s the world for Sony.