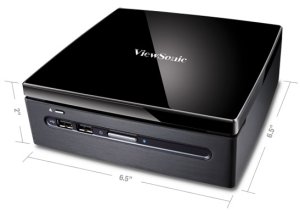 Viewsonic, best known for their displays, has just set their sights on the HTPC market. Jumping in with two models, Viewsonic no doubt hopes to make a good first impression in the home theater PC market, and their first entry looks to be a good way to do that.

Viewsonic is launching two models now; The VOT530, and the VOT550. Both come with Windows 7 Home Premium, Core 2 Duo 2.2GHz processors and 802.11 b/g/n wifi. Both systems have six USB 2.0 ports, along with DVI, LAN, and eSATA ports on the back. The systems come with a remote standard as well.