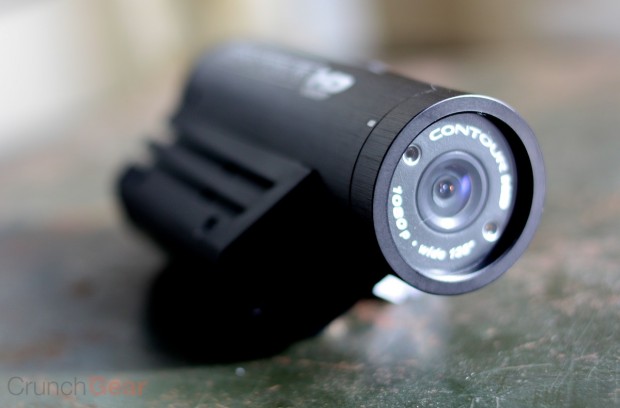 The Short Version: The ContourHD 1080p is a capable, semi-rugged, conveniently-shaped HD camcorder that’s great for all kinds of sporting and active events where a full-size camera isn’t practical. The 1080p video has admirable still image quality, but skew and compression mean it’s more of an enthusiast tool than a professional one. But for $330, it’s a great little tool for documenting your rides, falls, and so on, and putting the results up on the internet.

We’ve seen the ContourHD camera in a few guises before: first as the VHoldR, then as the ContourHD proper, and now the ContourHD 1080p. Does a resolution bump really necessitate another post? Well, it’s a cool gadget and there’s no danger of running out of internet, so why not?

Peter demonstrated the ContourHD on his skateboard, and I’ve done the same on my bike. Throwing caution, traffic laws, and my hair to the wind, I raced (-ish) from the top of Capitol Hill (15th) to Cafe Vita on Pike Street. Then we taped this sucker to my friend’s shoe and went for a walk in the park. That part of the footage is nauseating, so I’ve kept it to a minimum. Check out the video below; my comments on quality, exposure, and so on are embedded.

I had the camera stuck to the frame of my bike with one of the included flat-surface mounts; we also attached it to a headband-mounted flashlight but the end result was too ridiculous to wear in public. The ContourHD comes with a sticky mount for putting on a helmet or, say, car hood, and also a goggle strap attachment that took me a while to figure out. You can order additional mounts and replacement sticky pads from the site for a reasonable fee, or you can just wrap the thing in gaffer’s tape like we did in order to get it on something new.

The camera itself is small, as you can see in the pictures; I tried to have some objects in there for scale (the candy corn was not wasted). I put its weight at about a quarter of a pound, and upon checking the specs… yes, 4.3 ounces. I’m really good at ballparks like that. It’s heavy enough that you’ll notice it on your goggles (or shoe), but light enough that you don’t have to worry about it flopping down or peeling off its mount. It’s mostly aluminum on the outside, and it feels sturdy but not exactly rugged. I’m sure it can survive being banged about, but I wouldn’t trust it in a more punishing situation. It’s water-resistant, as you can see when Mike jumps in the puddle there. The lens has a plastic protector over it, so you don’t have to worry too much about what you wipe it with. The rear door just has a power button on it and the record slider above, but it’s quick and easy to pop it up and switch out the MicroSD card or change shooting modes. 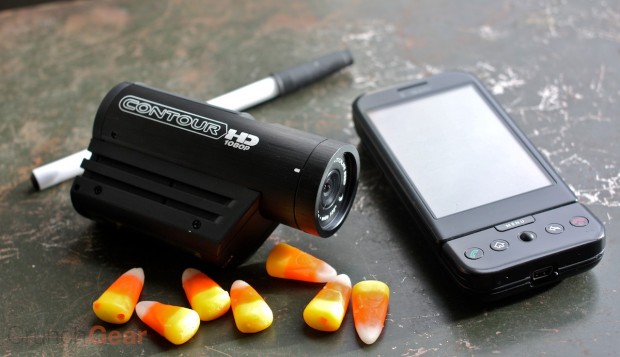 The device is meant to be set up beforehand and simply activated on-site. The switches and flashing lights aren’t exactly user-friendly, so keep the user guide handy if you want to be sure you’re doing it right and not trying to record to a full card. Basically you can switch between two recording modes and either record or stop recording. Beyond that there’s nothing to it.

You can activate a little laser level, which is kind of cool, but not really a precision instrument. The two dots, which indicate the horizon of the video, are no more than an inch apart, so if having a really level video is important, be sure to do a test before doing the actual stunt or race. In fact, due to the lack of any kind of feedback or monitor on the device, it’s probably a good idea to do a really quick video every time you set it up, to make sure you’re in the right mode and have the thing pointed in the right direction. My bike video has a lot of sky because I didn’t think to tip the thing down a bit.

Video quality is a mixed bag. Obviously 1080p is the star of the show here, so that’s what I tested. At that bitrate it’ll fill a gig in about 15 minutes, which is perfectly reasonable. Its max file size is, I think, only limited by the file system the MicroSD card is formatted in. It’s encoded in Ambarella something something, “minimal” quality, basically an H.264 .mov file. I was pleasantly surprised by image quality, at least during calm moments and still shots. Fast motion, as is the case with every low-end camcorder sensor, leads to skew and jelly effect. You may notice it in quick turns and during bumpy parts of the ride above: objects sort of distort or stretch briefly. Strangely, it also has a fast exposure speed, as evidenced by the individual drops visible when I ride through the mud puddle after entering the park. Slow sensor pull but short exposure… a strange combination. But it ends up looking fine, and certainly no worse than comparably-priced camcorders. Watch the video above to see how it performs in different circumstances, and click here to download a full-res, unprocessed movie file. 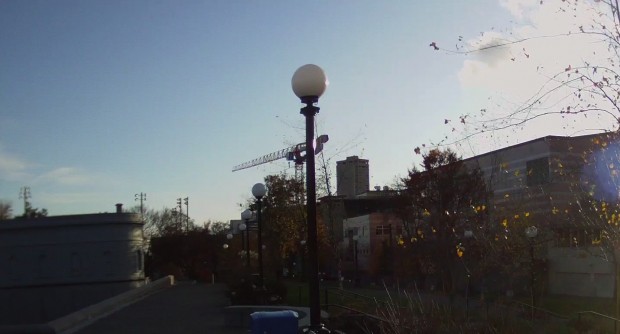 Looking at stills from the above-linked video, it’s clear that the compression hits the wall in areas of intricate detail or very high contrast, and the lens loses a lot of detail at the very edges. That’s really to be expected, though; remember, this is a compact, fixed-focus camera. Compared to, say, the Sanyo I like so much, it’s got nothing to be ashamed of. Exposure is remarkably even throughout; even when I’m pointing the camera more or less into the sun, it retains some shadow detail.

A camcorder for all seasons

The ContourHD 1080p is a handy little camera. The question is whether it has $50 worth of advantage over its friend the ContourHD “original flavor.” I’d say that if you’re already working in 1080p, the extra dough is justifiable. That said, the physical limitations of the sensor size and lens clarity mean that you’re not really getting that much more detail. It comes down to what format you prefer to work with. And it’s certain that 1080p downrezzed to 720p will look better than the “plain” 720p. As for the camera itself, if you are willing to accommodate the spartan controls, this little guy will be handy for lots of projects. Since it’s pretty resilient, you can put it in situations you might hesitate to put something like a Flip or a nicer 1080p camcorder.

Like the high-speed Casio I reviewed a while back, the possibilities really open up once you have the thing in your hand. I’d recommend the ContourHD in either of its forms to any amateur videographer looking to expand their oeuvre a little.

P.S. If you’re already a fan of the device, you can vote for it in the Crunchies.