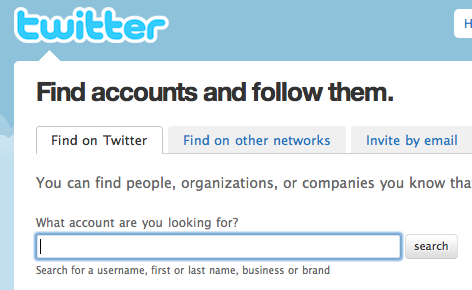 Perhaps the most annoying thing about Twitter as a platform is that it’s nearly impossible to find people you may know through third party apps. Essentially, you have to know their Twitter handle already to find them, or rely on some other more convoluted method rather than just say, looking them up by name. Soon, that won’t be an issue any more.

As Twitter has posted in its Twitter API Announcements Google Group today, there is now a new Find People API. This will extend the “Find People” capabilities that exist on Twitter.com to third-party developers. Presumably, as with Find People on the site, you’ll be able to search by first names, last names, businesses, and brands, on top of usernames.

Seeing as most activity still comes through Twitter’s APIs, this is potentially big news as the service tries to get back on track in terms of growth after flatlining the past few months. Plus, as Twitter extends business and brand functionality in an attempt to monetize, this new search ability will also be key.

You can find out more about the Find People API here. As Twitter co-founder Evan Williams tweeted a few minutes ago, “Oh good, a find people API: http://bit.ly/dDvy8 If you wondered why you can’t search for people from Twitter apps, this was the missing link.” Indeed.