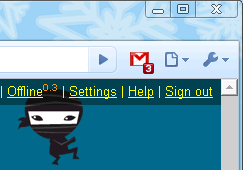 For some time now, Google Chrome has been working with a number of extensions — but unofficially. That’s about to change in a big way, maybe as soon as tomorrow. And some digging through backchannel chatter reveals some of Google’s intentions here.

As first spotted by DownloadSquad earlier today, Google appears to have tipped its hand a little early. In the newest builds of Chromium across all the platforms (yes, even Mac and Linux), you can clearly see the jigsaw puzzle area in the lower right hand corner. This is in the same place that the colorful stripes usually appear to take you to the Theme Gallery. But clicking on this area currently redirects you back to google.com — but as you can see when you hover over it, clearly there will be something at https://chrome.google.com/extensions, presumably an Extensions Gallery.

Next to this new jigsaw picture is a note at the bottom of the page reading: “New! Chromium now has extensions and bookmark sync.” “Extensions” links to the URL above, while “bookmark sync” links to a Google help page to show you how to use bookmark sync. Sadly, while this does appear to be working on the Windows and Linux versions of Chromium right now, it’s not yet working for the Mac.

Also note that when you go to the current extension page in Chrome (which you can find by typing chrome://extensions/ into the URL field), you will see a message that reads, “Want to browse the gallery instead?” The phrase “browse the gallery” is again linked to the still non-existant extensions page.

As you may recall, Google also tipped off its Theme Gallery a bit early on this tab page just before it launched. Chatter here by Google employees seems to suggest this Extension launch is indeed imminent. The image on the right would look to be some sort of new Chrome menu placeholder icon related to extensions.

And there’s more. Below, find some other pictures and information I was able to find in the Chromium Code Reviews area (placed by Google employees) that seem to make it very clear that Google is about to unleash extension support to rival that of Firefox. Based on what I’m reading, developers will be able to add icons to the Chrome toolbar (likely what the image above represents), add temporary icons inside the Chrome address bar (think: RSS icon), allow users to customize the extensions, and developers will apparently even be able to implement their own versions of “standard browser pages such as the New Tab page.”

From the backchannel talk, it sounds like Google will have a few of its own extensions ready to go at launch. One will have something to do with Google Maps, another will have to do with Google News, a third will allow you to automatically update builds of Chromium (much like the tool we built several months ago). But by far the most interesting is the Gmail Checker. As you can see in the image up top, it will use badging, tagging a number to the icon to let you know how many unread items you have.

The key for all of this though appears to be to show developers just how easy it is to make your own extension for Chrome. That’s what many of the images below represent, an easy “hello world” extension that can apparently be built in just a few steps. With speed no longer its strong suit, extensions are perhaps the last great feature Firefox has a stranglehold over. If Google gets it way, that could soon change. 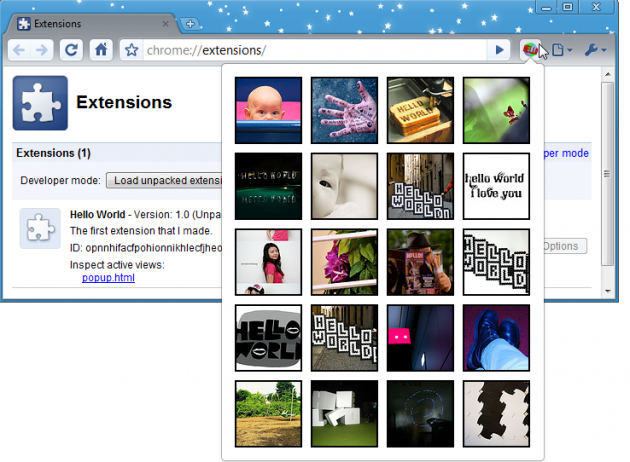