As you can see in the screenshot, both the Google Mail Checker and (Chromium) BuildBot Monitor are up and running in a new build of Chromium. In fact, they’re even working on the latest builds of the dev version of Chrome for Mac, which just got updated tonight as well (they weren’t working with the previous build). The one other sample extension, “Subscribe in Feed Reader” doesn’t appear to be working yet on Macs, but images posted earlier by Google Operating System indicate that this is working on Chromium builds for Windows. To find all of these sample extensions, go here.

Installing these extensions is a breeze. You click the “Install” link, the file downloads, you click to run it, it asks if you’re sure you want to install the extension, you say “yes”, and you’re done. There is no need to restart Chrome/Chromium, they work right away.

The Google Mail Checker is particularly useful since it is badged with a number to show you exactly how many unread Gmail messages you have without having to have it open. Clicking on the icon launches Gmail in a new tab. Likewise, the Chromium BuildBot lets you know if there’s a newer version to download.

Of course, there have been a number of unofficial Chrome extensions that have worked for a while with the browser (Xmarks has a good one, for example), but it’s good to see some real ones rolling out, even if they are just samples for now. More importantly, neither seem to slow down the browser at all, which has become a major problem with Firefox extensions. Hopefully they can keep it that way. 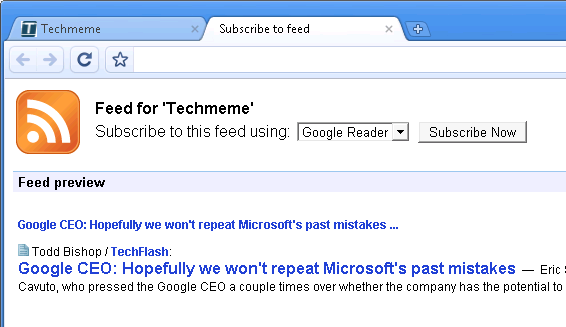