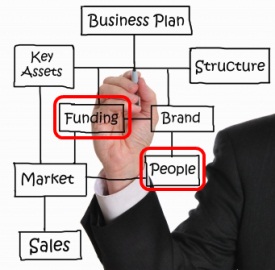 Let’s kick off the week on a positive note: innovative startups in the U.S. continue to attract capital from investors, and in turn are doing their part to counter the trend of the rising unemployment rate in the country.

Evernote, an information capturing service provider, recently closed a $10 million round while personal TV service Sezmi has been able to add another $25 million to its already sizable war chest. In addition, mobile advertising network operator Millennial Media scored $16 million in Series C funding. And, as we’ve already covered, Outright has raised $5 million in venture capital from Sequoia and other VC firms.

That means we can add over $56 million in funding to CrunchBase so far today. Not too shabby for one Monday morning’s worth of funding news for U.S.-based tech startups, and it’s good news for the economy, too.

According to the National Venture Capital Association (NVCA) and StartUpHire.com, thousands of jobs are available at venture-backed startups today, despite the overall job-cutting trend that is still apparent in the wake of the financial crisis that hit the global economy unequivocally hard.

StartUpHire, one of the many job boards / search engines focused on startups, says it currently lists nearly 11,000 jobs that are available at more than 2,500 companies across a variety of industries, states, and functions (also check out our CrunchBoard, where you can find great places to work at, including TechCrunch).

As part of Global Entrepreneurship Week 2009, the NVCA and StartUpHire will highlight the contributions of these young entrepreneurial companies to economic growth by releasing detailed jobs data throughout the week, improve the visibility of the job board on the NVCA website and by publishing testimonials from start-up company employees on their work experiences – in 140 characters or less.