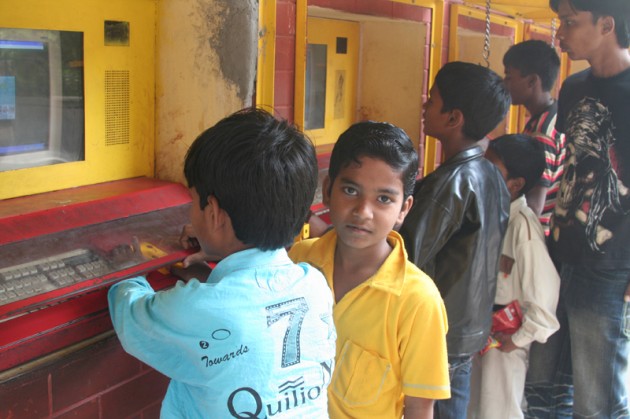 DELHI, INDIA–“I’ll take you! I live there!” a small boy with a blue shirt and a perfect toothy grin said as he ran ahead of me. His quiet friend in yellow jogged beside him smiling shyly, his jet-black Elvis curl bobbing on his forehead. The boy in blue stopped a few yards in front of me turned around, beaming and added in Hindi, “I know computers quite well.”

These weren’t middle class kids on the well-trod, parent-driven Indian path to seats at IIT. These were Delhi slum kids, whose families likely live on less than $2 a day. And yet, for the last five years, they’ve spent several hours of their free time every day playing games and learning English, Math and Science on computers.

So how have they bridged the much-agonized-about digital divide without a hand out from a chip company, computer company or wealthy philanthropist? A for-profit Indian company called NIIT.

It started back in 1999 when Sugata Mitra, NIIT’s chief scientist, noticed his kid could learn how to use gadgets like a mobile phone far faster than tech-savvy adults could. At this time, most computer “labs” in Indian schools were one or two computers that were only to be used under the strict supervision of a teacher. The reasoning was computers were expensive and required training and supervision. As a result many kids only got to look at them from afar in the classroom.

Instead Mitra wondered what would happen if he left a computer out in the open for a group of children to discover. So he literally knocked a hole in the office wall to the slum on the other side.  He shoved a computer in the hole and set up a camera on a tree limb to record what happened. A 13-year-old, illiterate kid who’d never seen a computer wandered over tentatively, and soon realized he could move the cursor by moving a finger across the touch pad. Within four hours, a small group of kids had gathered. They had figured out how to open Internet Explorer and were playing a game on Disney’s Web site. “All of us were absolutely shocked watching that,” says Abhishek Gupta who heads the program now. Some expected the kids to break or even try to steal the computer.

A pilot project with the World Bank followed, and 22 of these “Hole in the Wall” kiosks were set up around the country from 2001 to 2005. The organization studied the results closely. The most obvious take-away was that kids left on their own will learn computers. The project also helped develop team-building and social skills—with 200 kids sometimes huddled around one screen. Whether the computers lead to more general academic improvement was less clear, but in many cases it was up measurably, Gupta says.

But interestingly when that partnership was over, NIIT didn’t take the project down the non-profit route. It’s not because the company is adverse to such things—it’s also opening a new high-end university that is run as a non-profit. But there’s a unique attitude in India that believes the way to eradicate poverty is to turn India’s scrappiest, free-market entrepreneurs on the problem, not to increase handouts.

NIIT now sells the kiosks at between $6,000 and $20,000—depending on which model and how many screens—to the government, who puts them mostly in schools in India’s poorest areas. There are 500 stations in India and a handful in 10 different African countries.

Having customers means NIIT has had to compromise on the original vision. For instance, the government requires administrators to keep an eye on the systems. They’re not open when an administrator isn’t there. But running the program as a business has assured its survival and given NIIT the cash flow to pour money into content creation so it doesn’t have to rely on the country’s spotty Internet connections for kids to stay engaged. Gupta says his job isn’t necessarily to be a profit center. Success is running a break-even program that makes a social impact. But that’s still a world away from a donor-funded program.

NIIT isn’t alone. For profit companies have made microfinance loans for years in India. One of the most known is SKS Microfinance. It was run as a non-profit in the early days, but when it was time to scale, decided to turn into a Sequoia Capital-backed startup. “It’s important to realize the poor have been paying three-to-four times more to the local money lender,” says Surendra Jain, a managing director with Sequoia in Bangalore. “There’s nothing wrong with using the same tools to scale the way other companies scale. The question is: In your heart are you doing the right thing?”

Even non-profits I’ve met over the last two weeks run themselves to rely on revenues not donors. An example is LabourNet,  a company that seeks to move India’s huge informal workforce into a formal channel. The company organizes phalanxes of construction crews, drivers, cooks and retail clerks and matches them with the best employers. How does it reach them? Word of mouth and SMS. So far 7,000 workers are in the system.

It was started by Solomon JP. His umbrella non-profit organization, MAYA, has already produced one self-sustaining company that trains poor youth in making high-value furniture. With a grant from Bill and Melinda Gates Foundation, CHF International, an international NGO addressing urban poverty in India, is providing technical and financial support to help LabourNet become a self-sustaining enterprise. “Being poor isn’t about not having money, it’s a lack of capabilities,” JP says. So LabourNet doesn’t stop at getting poor people a job, it offers access to healthcare benefits, issues ID cards, and helps with bank accounts, literacy, and job training too. The worker pays a small fee, and the employer pays LabourNet a larger one in exchange for matching them up.

It’s hard work. JP has been working with the poor in Bangalore for some 15 years and says it’s like Hotel California. “I don’t recommend this path. I can never leave. I’m trapped!” he says with a weary half-smile. (I’m not sure what percentage of that is a joke.) But he believes he and others can solve the problem through self-sustaining means as long as organizations don’t sacrifice humanity in the name of efficiency.

It’s a dramatic difference from China, where most entrepreneurs are building businesses that are aimed squarely at the top of the pyramid or the burgeoning middle class. But since India is a democracy—and not an authoritarian one—it doesn’t have the same social safety net of other emerging worlds. It’s fitting that it’s trying to use a free-market economy to solve its social ills instead— something American do-gooders could probably learn from. After all, we’ve got our own digital divide.

One final note on NIIT’s Hole in the Wall program: It was allegedly the inspiration for the book “Slumdog Millionaire” which spawned the movie. “Where’s my Oscar?” is a favorite joke of Rajendra Pawar, the chairman and co-founder of NIIT. I asked a lot of people working to eradicate poverty how they felt about the movie, and most said it was neutral-to-positive for India. It doesn’t hurt to show rich Americans how one-third of India’s 1.2 billion-person population lives, even if it was sensationalized. The difference is none of them are banking on a one-time windfall as the answer.