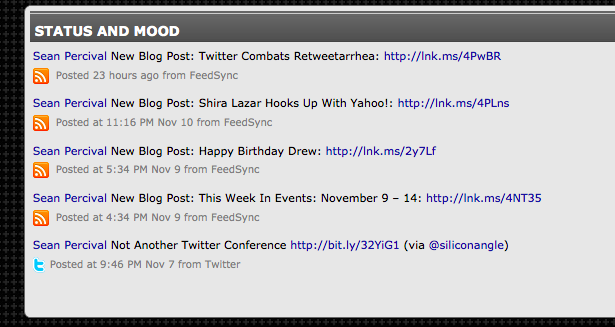 Plenty of people use Twitter to syndicate out their content — like TechCrunch, for example. And often those tweets also are syndicated out to other places — like MySpace, for example. But now you can remove one step in that process if you choose with MyFeedSync for MySpace.

This tool, developed by Egghead Ventures, with the help of developer Sean Percival, who has been advising MySpace recently, uses MySpace ID to sync any RSS feed with your MySpace status. This is similar to the tool that MySpace’s recently announced that syncs your Twitter with your status. But instead of showing a tweet with a Twitter logo, it shows a blog post title with a link, and a RSS logo. This should make it clear to people looking at your profile that you’re highlighting a post of yours rather than just linking to some piece of content you think is cool. The blog URLs are shortened with MySpace’s lnk.ms shortener.

There are also options for this tool such as setting the time interval that dictates how often it will pull in new content. And you can set an into text to put in such as “New blog post:”