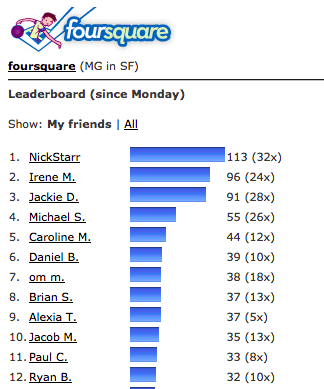 By now, if you’ve heard about the location-based service Foursquare, you know that a key component of it is the gaming element. One level of this game is that users compete to get mayorships of venues within cities. A second level involves obtaining badges. But a third level is much more straightforward: A leaderboard. Now Foursquare is trying to up the motivation behind that element of the game by bringing in charity.

Foursquare is teaming up with an org in New York City (where they are based), Techies Give Back, to translate checkins into donations. Ideally, this money would come from brands/organizers that would sponsor the Foursquare Leaderboard for a week, co-founder Dennis Crowley tells us. Money earned would be given to CampInteractive, a nonprofit that works with inner-city youth on both outdoors and tech projects, which Techies Give Back is working with to hold an event on December 13.

Here’s how this would work: When you checkin on Foursquare, you generate points that go towards your score on the leaderboard. These points differ based on a few factors. Generally, you get more points if you’re checking into a place you haven’t been to before, or in a long time. You also get more points for adding a venue that isn’t yet in Foursquare’s system. Based on these points, a sponsor would donate a set amount of money per point.

Foursquare is looking for a brand that will donate at least $0.03 to Techies Give Back for each point earned. In NYC, that means the charity would have raised over $4,500 last week. (For those keeping score at home, that means there were about 150,000 points earned from checkins in New York last week.)

The sponsorship would allow for a complete re-skinning of the Foursquare leaderboard, Crowley notes. The week they are targeting is December 7 through the 12. Ideally, they’d have a brand step up with a winning proposal by December 1. Those interested should email info [at] techiesgiveback.org.

While this will just be an experiment in NYC at first, Crowley hints that this is something the company is thinking about doing with its leaderboard going forward. And this extends upon the idea of using the game element of Foursquare for good. Last month, the service teamed up with BART, the public transportation system in the San Francisco Bay Area, to encourage people to check in more at BART stations to earn rewards such as free rides and a special badge.

Of course, none of this has to do with the business model Foursquare is also working on, which involves partnering with local venues to create incentives such as free meals/beer for users who checkin.