When it comes to online auctions, most people think of the lengthy, generally unexciting (at least until the last few minutes) auctions found on eBay. But in the last year we’ve seen some more interesting action in the space — Swoopo is one site that comes to mind, but it is an “entertainment shopping” experience that has an element of gambling to it (you can walk away empty handed and still lose money). StuffBuff is a new site that’s taking a different approach: it’s looking to combine the real-time nature of sites like Twitter with traditional auction sites like eBay. The company made its debut in the TechCrunch50 Demopit, and is today launching in private beta. We’ve got 500 invites for TechCrunch readers. To join, use the invite code “TechCrunch”.

A standard StuffBuff auction (called a ‘Live Haggle’) looks quite similar to a chat room, with a few key differences. The top of the chat window shows a ‘time left’ indicator that lets you know when the auction ends, and there’s a bidding window below the chat box where you enter how much you’re willing to pay (entering a bid is considered binding). Whenever you create an auction, you’re responsible for staying active in the chat as viewers come online and bid and ask questions (because of this auctions only last a matter of hours or minutes, as opposed to the day or week-long auctions you’ll find on eBay). And because of the public nature of the chat everything is transparent — you don’t have to worry about back channel discussions.

Aside from the real-time nature of the auction, what sets StuffBuff apart from tradional auction sites is the potentially viral nature of their auctions. Any time you create an auction, you can embed it in your website to share with friends. Visitors will be able to bid on these auctions directly from your site (they’ll be able to use Facebook Connect or Twitter OAuth to sign up, though these aren’t implemented yet). Payments are done through Paypal’s payment platform. 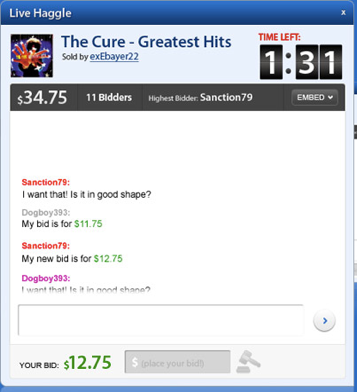 StuffBuff also has a second kind of auction called ‘Blink’ that does have some similarities to Swoopo. The auction invites users to watch as the price of an item falls down over time. The more people watching, the faster the price falls, until someone pulls the trigger and buys the item. These can be embedded as well.

StuffBuff makes money by charging around 25-50 cents to set up an auction (which is substantially less than eBay), $1.50 to set a reserve, and then 5% of the final value. The pricing of the Blink auctions is still be determined.

StuffBuff has done some interesting things to help make creating auctions easier than on some other services. The site has a feature that lets you either plug in a USB barcode scanner or use your computer’s camera as one: point it at a product, and StuffBuff will enter it into your sellable inventory. When you’re ready to sell an item the site will try to pre-populate your auction’s details with known information about the item, like size and weight.

StuffBuff has an interesting idea, but there are are few obstacles that immediately come to mind. Founder Michael Langer says that he wants StuffBuff to be like “eBay 2.0”, explaining that he sees eBay’s 95% marketshare as an opportunity since that site hasn’t changed much in years. But launching an auction site isn’t easy — it’s going to take some time to get users to trust these embedded widgets enough to actually start handing money over to them. My other concern involves the real-time nature of the auctions. Because auctions only last a few hours, unless you have some mechanism to really spread them virally (say, through a popular Twitter account) it seems like it would be challenging to get more than a few people bidding, and even then they might well be your friends, who aren’t always the best people to do business with. That problem might go away once the site has a sizable user base that will expose your auctions to strangers, but StuffBuff needs to get over that initial hump.