Now that in-app purchasing for free apps has been live for a few weeks in the iTunes App Store, and Apple is now ranking the top-grossing apps, whether they start out as free or paid, we have some initial data on what kinds of apps are pulling in the most money from in-app purchases. (In-app purchases allow apps to offer a free version and then make money by requiring consumers to pay for additional features or content). Today, Distimo put out a report (download it here) which breaks down the top 40 grossing in-app purchasing titles by category (see chart below). Games, social networking, and book apps are doing the best job upselling consumers from free apps to paid enhancements. Music, news, and finance apps, not so much.

Games top the rankings of these best performing apps, with ngmoco’s Eliminate Pro (iTunes link) currently the No. 8 top-grossing app, validating ngmoco’s shift from a paid to freemium model. Mafia Wars (iTunes link) is another example. Seven of the top 40 grossing apps with in-app purchasing are games.

It seems that apps which are addictive (like games) persistent (like social communications apps), or lengthy and easy to sample (like books) are doing the best with in-app purchases. It trickles down after that. There is one music app in the top performing apps—RJDJ (iTunes link), one news app, one finance app, and so on. People just don’t want to pay for songs, news, or stock quotes. 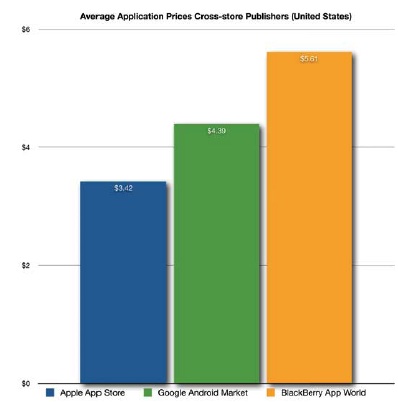 The Distimo report also compares the average price for the top 100 mobile apps in the iTunes App Store, the Android Market and the Blackberry App World. The Average price of an app in iTunes is the cheapest at $3.42, followed by Android at $4.30, and Blackberry Apps at $5.61. With more than 10 times as many apps as any of the other app stores, all that competition and proliferation of $0.99 apps probably explains why iTunes apps are the cheapest, even among the top 100. Also, Blackberry apps all have a minimum price of $2.99. Research in Motion just announced that developers will be able to include in-app transactions next year. It doesn’t appear that there is any official way to include in-app transactions in Android apps yet. 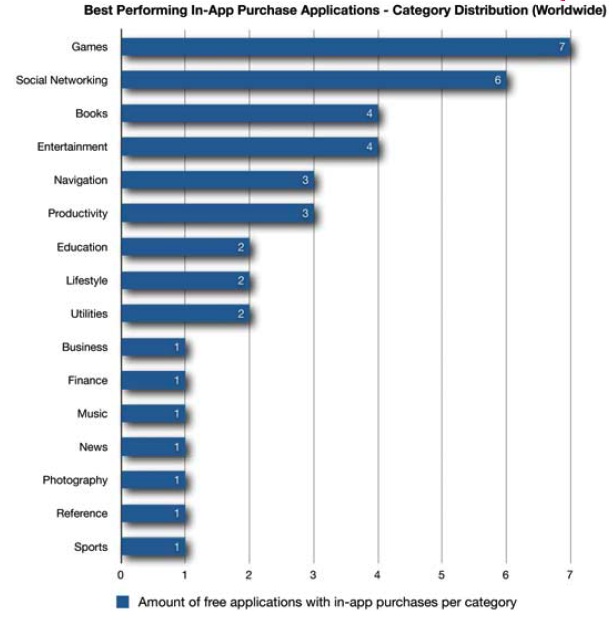