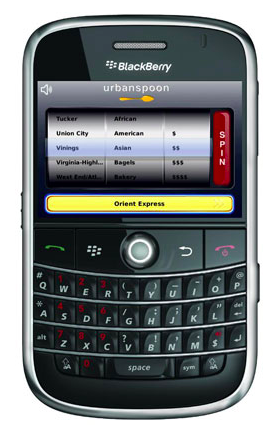 In major metropolitan areas, the BlackBerry at lunchtime is a force to be reckoned with. And now it can be a device to help those urbanities actually find a place to eat with the launch of Urbanspoon for BlackBerry.

Urbanspoon has been one of the most popular apps for the iPhone since it launched alongside the App Store in the summer of 2008. By blending location data with a fun, accelerometer-based way of finding good nearby restaurants, it even caught Apple’s eye, which soon began featuring it in its television commercials, fueling its success. And that success led to IAC eventually purchasing the self-funded startup in April of this year for a price in the seven-figure range.

But Urbanspoon didn’t stop thinking about what to do next, and the first stop is the BlackBerry . It just made sense since there’s a good overlap between the type of people who use BlackBerrys and the type who use Urbanspoon, co-founder Ethan Lowry tells us. So the company teamed up with Xtreme Labs, a popular development shop, to create the app.

Like its iPhone brethren, the app features the familiar slot machine-style interface to allow you to tailor your restaurant searches. For devices like the Storm, which has an accelerometer, you can use the app by shaking it. For other BlackBerrys, you simply click a button to set the wheels rolling. “It’s one of the snazziest BlackBerry apps there is,” Lowry says.

The reason Urbanspoon outsourced part of the development of the app rather than do it all in-house like they did with the iPhone is because there are too many types of BlackBerrys that need different versions. For example, there are four different versions of the Urbanspoon BlackBerry app alone, we’re told. Despite it being acquired by a large company, Urbanspoon remains a small team, and they simply don’t have the resources to devote to all these different devices.

But the team is already thinking ahead. Lowry said there was some debate as to whether they should go with BlackBerry or Android first as their next target. He’s excited about Android now, as opposed to a year ago when things were still up in the air about the platform, and believes that it will definitely be their next target. Other platforms like Windows Mobile and webOS (which the Palm Pre runs) will have to wait. Though the team is also debating crowd-sourcing the creation of apps for other platforms to its users — an approach with other small teams like Foursquare are taking.

In terms of monetization of the app, it remains for now mostly a user grab. There will be limited monetization through ads and the like (which BlackBerry has a revenue share agreement for), but it will be minimal, Lowry says.

Go here to get the app, it will work on most of the newer BlackBerrys.