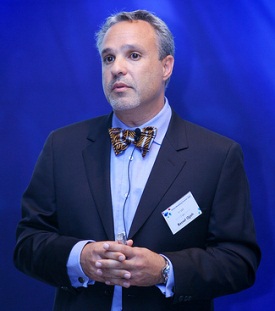 I corrected the headline for one of the articles I published earlier today about an investment made by Bassel Ojjeh in ArabCrunch.NET.

Turns out Ojjeh is actually no longer senior vice president and head of Yahoo!’s strategic data solutions group. The man apparently left the company a few weeks ago but hadn’t yet found the time to change his LinkedIn profile.

Bassel Ojjeh started his career in the software business as developer and later senior manager of Fox Software, which merged with Microsoft in 1992. Ojjeh stayed with the company for another 8 years and went on to co-found digiMine, which later morphed into Revenue Science and changed names again some time after to finally settle for AudienceScience (for now).

Ojjeh was one of the co-founders of data mining and warehousing solutions provider DMX Group, a company that was acquired by Yahoo in August 2004.

He became senior vice president and head of the new business unit (strategic data solutions group or SDS group), whose team members were responsible for combing through the dozens terabytes of data that Yahoo users generate on a daily basis by clicking links, weeding out the relevant bits, compressing and storing it.

Ojjeh told me he’ll be engaging in a couple more angel investments in the USA and the Middle East, and that he’s currently already set to start a new company.