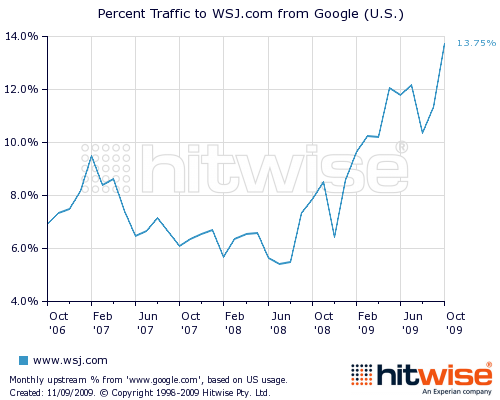 Whenever Rupert Murdoch goes back to his home country of Australia, he loosens up and says things to the press (usually his own outlets) that he might not say in the U.S. Of course, everyone in the U.S. picks up on it and it becomes a big story, as it did today after Murdoch told his own Sky News that he might start blocking Google and other search engines from giving searchers full access to articles on the Wall Street Journal‘s website, WSJ.com. Asked whether he realized that Google was sending his news site a ton of traffic, Murdoch responded, “”We’d rather have fewer people coming to our Websites, but paying.”

If Murdoch wants fewer people coming to the WSJ.com and other news sites he controls, blocking Google from indexing those sites is the perfect way to achieve that goal. Just over 25 percent of the WSJ.com’s traffic comes directly from Google or Google news, according to estimates by Hitwise. About 12 percent of that comes from Google News, and another 15 percent from Google search directly.

About 44 percent of visitors to the WSJ.com are new to the site, so Google is doing a good job of introducing new readers to the WSJ. But Murdoch clearly would rather have loyal readers than those delivered by search engines. Or at least that is his story, and he is sticking to it. Never mind that in order to get people to pay for content, they first have to be able to find it.

Meanwhile, the WSJ.com still has a deal with Google which allows the search engine to bypass the paywall and show readers the full text of articles when they click through. Perhaps the WSJ is learning that there it can’t be half-pregnant. Either you charge everyone for content, or you make it free, because if there is back door everyone will find it. All the strange arrangement with Google is doing is training people to search on Google News for stories on the WSJ, rather than go directly to the WSJ. But I digress.

Here is the full video interview with Murdoch below: