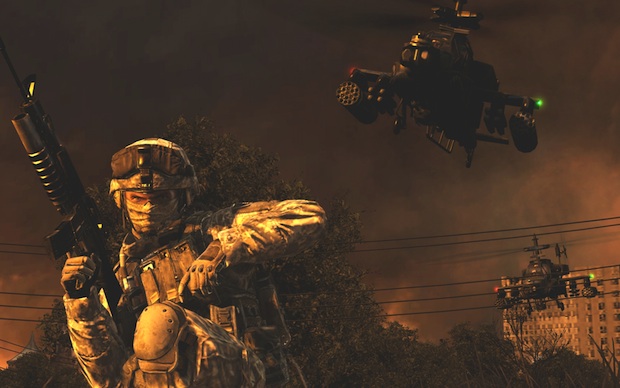 So to recap: nobody has been given permission to sell Modern Warfare 2 early. It’s a crazy Internet rumor that has no basis in reality. But it’s happening like whoa. What is based in reality is that the first reviews of the game have started appearing online, and they’re all from UK newspapers. A strange place to see the first reviews of what’s probably going to end up being the biggest game of the year (with all due respect to Assassin’s Creed II).

Both The Daily Telegraph and The Guardian (my favorite British paper, if only for its football coverage) gave the game perfect scores. I’ll quote each review’s final paragraph, because it’s easy and my head still aches like nobody’s business.

All told, Modern Warfare 2 crosses into the must-have category of video games effortlessly. It offers an unmatched shooter experience, a compelling story mode, a slick package of mini missions and a multiplayer which is pretty much unparalleled in depth. It’s sure to satisfy the demands of its fan base, and anyone who considers themselves a fan of shooters in general should definitely pick up a copy. It may be debatable as to whether Modern Warfare 2 is objectively the best release of 2009, but it’s certainly the finest game in its genre, as well one of the truly great games of this or indeed any year.

All in all, MW2 is exactly what fans were expecting. Yes, it carries a hefty price-tag, a shortish single player campaign and only adds a handful of genuinely new elements to the prequel, but you won’t find a more polished, intelligent FPS this year. For non-stop action, superior AI and perfectly balanced weapons, it’s a worthy chart-topper that hammers a nail into any hope of the COD franchise returning to its WW2 roots anytime short of the next round of console upgrades. And, on this evidence, you won’t find too many complaints about that.

Sounds to me that if you’re even remotely a fan of the FPS genre, then you’ll probably at least like the game.

Look for more exciting reviews to hit the Web in the coming hours.