A couple of weeks ago, we put DotBlu (formerly known as BluBet) in the deadpool. The San Francisco startup, which ran an online betting play at launch which later morphed to some sort of social gaming service, discontinued its operations on October 16 despite the startup being backed by a host of star investors (Jawed Karim of YouTube fame and Kevin Hartz of Xoom / Eventbrite to name but a few).

Turns out the venture still had a considerable amount of money left in the bank, which they will now be using to run the company in its third life under the name TownHog.

The startup has reinvented itself completely this time, leaving its social betting past behind completely because it simply “wasn’t working out”, TownHog CEO Song Kim tells us. It’s now hedging its bets – wink, wink – on the concept of collective purchasing.

Much like Woot.com, TownHog will look for and feature one online deal every day, but the main difference with Woot is that it’ll focus on promotions for local businesses rather than good deals on products that are widely available. It’s kicking things off in San Francisco, but intends to expand into more territories quickly, says Kim.

The first deal that went live this morning is with Cento, which I understand is a hot coffee bar (pun intented) located in the SOMA neighborhood in San Francisco. Basically, if enough users sign up for a deal they get to redeem a voucher that expires at a certain point in time.

In the case of Cento, users get $20 worth of Cento coffee for the price of $10. But the 50% discount will only be valid when 100 people sign up for the offer before the deadline (44 hours away at the time of this writing), and the voucher must be redeemed before the end of this year. People are charged only when the minimum of buyers chip in.

TownHog does a good job at keeping things simple and enables people to easily recruit other buyers on Facebook, Twitter and by e-mail. But it will be competing with a host of other companies offering local deals and coupons in some way, and it’s not like the concept of collective buying is new (many startups have stumbled trying to scale it into a big business).

DotBlu / TownHog received capital in an early angel round from Jawed Karim (Co-Founder of YouTube), Kevin Hartz (Co-Founder of Xoom and Eventbrite), Joe Greenstein (Co-Founder and CEO of Flixster) and Keith Rabois (Former PayPal & LinkedIn Executive and Current Slide Executive). A later $2 million round was funded by Maples Investments and DE Shaw.

We’ve now learned more investors are involved, including Bebo co-founder Michael Birch (who also sits on the board), Jeff Clavier (SofttechVC), Ron Conway and Howard Hartenbaum (via DraperRichards). The company has about $1.5 million in capital left, which Kim says should last them another 17 months at least.

Welcome back into the game, DotBlu! 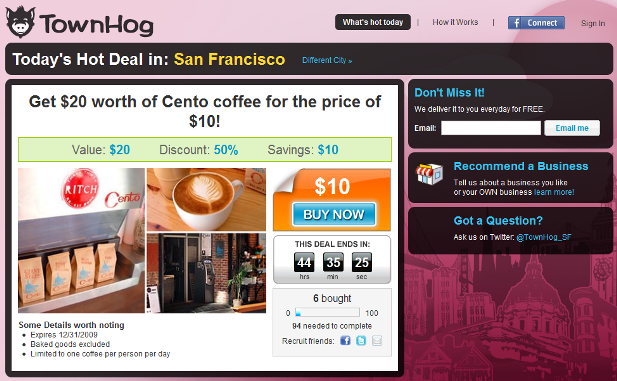