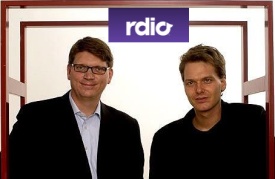 Now that they got what they wanted – a renewed stake and board representation in the Skype that will be spun off eBay soon – the Scandinavian duo Niklas Zennström and Janus Friis can divert more of their attention again to the latest Internet venture they’re putting their weight behind: Rdio. The yet-to-launch digital music startup was first talked about publicly a couple of weeks ago in a New York Times article but we haven’t heard any further information about the startup.

I’ve been keeping busy this weekend doing some very basic research – I love you, Internet – about Rdio and discovered a couple of interesting details that have emerged on the Web since the stealth startup got its first dose of media attention.

First of all, a search on LinkedIn used to surface only Malthe Sigurdsson, a London-based designer who used to be Creative Director at Skype, as one of the people hired by Rdio – as VP of Design. He can stop hiding that now. :)

— Carter Adamson (COO, Rdio) – former General Manager of Desktop Products at Skype and prior to that Director, Product Strategy/Business Developement at AOL and before that Senior Program Manager at ICQ. His recruitment seems to suggest that the Rdio service will not be exclusively browser-based.

— Todd Berman (VP of Engineering, Rdio) – first hired as Software Engineer at imeem in 2005, Berman served as VP of Technology at the venture-backed social music startup until switching to Rdio back in August 2008. During his tenure at imeem, Berman undoubtedly learned a lot about what it takes to distribute music on the web and scale the service for a large user base.

— Manish Singh (Senior Software Engineer, Rdio) – once a senior member of Oracle’s technical staff, Singh was hired by social browser startup Flock in September 2005, where he held a number of technical roles before becoming the company’s Director of Technology. His recruitment (Feb 2009) suggests Rdio won’t exclusively run on desktops but also inside browsers.

Now pay a visit to the Rdio website. Not much to see, right? If gives you an option to sign in to your account if you happen to be lucky enough to have one (if you do, we have a special space reserved in our inbox for screenshots of the service) and an option to sign up for updates to your e-mail address. Other than that, there’s nothing but a link to an e-mail address, which actually bounces messages when you send e-mails to it, rendering it gigantically useless.

But then there’s a copyright notice at the bottom right that reads ‘©2009 Pulser Music Services Inc’. A search on the Web reveals that this appears to be a subsidiary of private equity investment firm Europlay Capital Advisors, which cites a preference to invest in “cross-border media transactions and in interactive entertainment businesses”. If you want to know more about Europlay from when it was founded in 2007, here’s the SEC filing.

And guess who’s Chairman and Managing Director of Europlay Capital Advisors? None other than Mark Dyne, the former CEO of Sega and Virgin Interactive Entertainment who was one of the first people to invest in Skype – he was also a member of the company’s board from 2003 to 2006 – and until recently sat on the board of another venture started by Friis and Zennström: the ill-fated Joost.

Rdio CEO Drew Larner is also connected to Europlay, where he apparently recently served as Managing Director. Prior to Europlay, Mr. Larner spent over twelve years as an executive in the motion picture industry, most recently as Executive Vice-President at Spyglass Entertainment Group. In that role, he was involved in all operations of Spyglass with specific oversight of business development, international distribution and business and legal affairs.

So we have some serious veteran media executives investing time and resources in Rdio, which based on my findings already boasts a highly diverse and feathered team of engineers, developers and managers with a track record in digital music companies and carrying experience in working for venture-backed startups. Its earliest hire – that of Todd Berman – was made in August 2008 according to his LinkedIn profile, so apparently they’ve been building this company for nearly a year and a half now.

All that, combined with what Janus Friis recently told Bloomberg regarding Rdio, makes this a company to watch closely:

“We have watched many ad-supported music businesses come and go. We felt the time was right to revisit this space, this time with a compelling offering and a sustainable subscription model.”

It’ll be very interesting to see what they come up with – the service is said to be on track for beta launch in early 2010 – and if they’ll be able to steal some of Spotify’s momentum when that company finally makes its way to the United States.

One thing is guaranteed: Rdio won’t be one of those online music startups who manage to fly under the radar and whose leaders lack the experience and negotiation skills to effectively deal with the music industry juggernauts who control the majority of rights to the music this world has to offer.

Which isn’t necessarily a recipe for success of course – the tale of Joost proves as much.