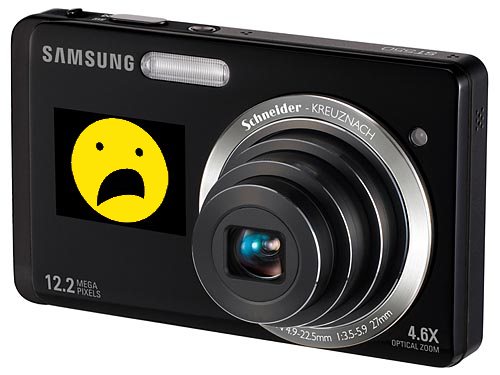 Bad news people, the Samsung TL225 camera that was released this August? Yeah, it’s pretty much a pile of crap. The front screen is off center, so your pictures look like everyone is staring off to the side, the touchscreen response (the only way to control the camera’s settings) is oddly disconcerting, the shutter lag is excessive, and low light sensitivity is non-existent.

Samsung really wants you to like this camera, as evidenced by the massive media campaign that they’ve been running (smiling monkeys, anyone?) but it seems to have been for naught. Wired reviewed the camera today and they’ve rated this one a 4/10. In addition to the laundry list of problems listed above, the image quality is also poor, much less then you would expect from a 12.2 megapixel camera.