When it was first unveiled at our Realtime Crunchup in July, easily one of the best features of the web-based Twitter client Brizzly was Groups. Basically, it allowed you to sort your Twitter followers into subsections, to make specific groups of users easier to follow. Of course, with Twitter’s new Lists functionality, you can basically do the same thing. So Brizzly is screwed right? Nope.

First of all, Brizzly has decided to make Groups play nicely with Lists — very nicely. Starting tonight, Brizzly is importing all of the Lists that its users have made on Twitter and it will begin showing them within Brizzly. But that’s not all: It’s also going the other way. Any Group that you made in Brizzly will be converted to a Twitter List. To be clear: A private Twitter List. So no, no one will be able to see that you put them in the “Loser” Group on Brizzly.

And of course, Brizzly does much more beyond Groups. Notably, it recently added Facebook support. That alone is worth the price of admission right there. But Brizzly also offers Direct Messaging capabilities that are superior to twitter.com. And it allows you to upload photos to its servers. And it displays pictures and video inline, in your tweet stream. So Brizzly should be just fine even with Twitter’s Lists now rolled out to everyone.

Brizzly expects the Groups to Lists transition to be complete by tomorrow night, co-founder Jason Shellen tells us. Here are the other main features he laid out in an email: 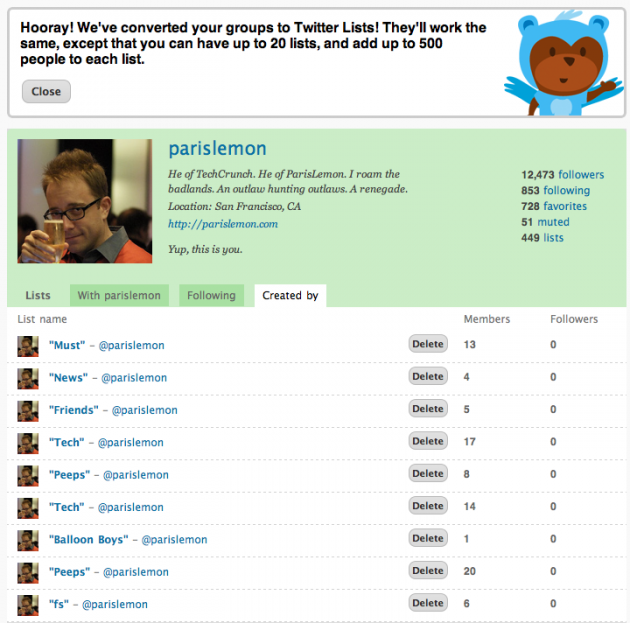