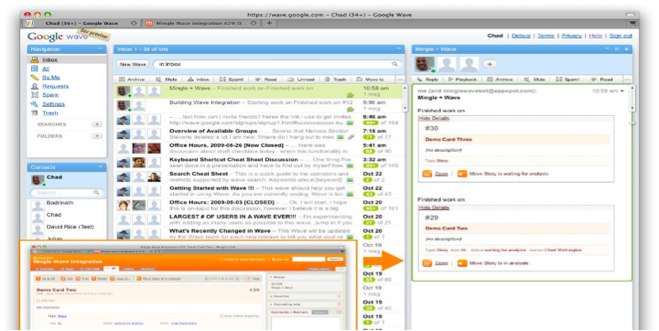 ThoughtWorks Studios, a software development startup, is launching a new version of its project management tool, Mingle, and is rolling out integration with Google Wave.

Mingle has been upgraded to feature a communications platform within the application, called “Murmurs.” A mix of an IM and Twitter-like microblogging format, Murmurs allows anyone involved in a software project to have online conversations that are associated with a specific Mingle project.

Mingle has also added project management capabilities including, increased scalability, the ability to let managers to write customized reporting macros by pulling data from multiple projects and a feature that lets users create links between content across projects for cross-project traceability.

Mingle is also launching an integration with Google’s new collaboration platform, Wave, to help improve IT collaboration and software development productivity. Users can view and interact with Mingle from within Google Wave. The partnership is an interesting play for the IT-focused enterprise, when its comes to Wave, which has been received with mixed views.