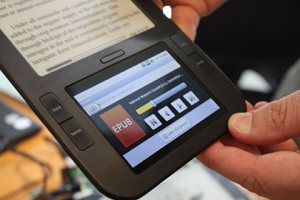 The e-book seems to be the next big thing as we roll into the end of 2009. What with the Kindle 2, the nook, and others coming on the scene, it’s interesting to watch what’s coming next. For example: the Alex eBook Reader. It’s running Android, and has an absolutely insane frame rate (for an e-book reader).

Now to be fair, the Alex only has a frame rate of 3 FPS. But when you compare it to other readers, that have a rate of (generally) 0 FPS, you’re talking a significant improvement. This will allow the Alex to show simple animation, and other types of moving data. The Alex also sports dual screens, a 6 inch reader screen and a smaller touch capable screen mounted below. Maximum PC has a complete write up (and teardown) of the Alex, and they go into a little more depth about what the Marvell chipset is capable of.